I only just got the latest volume in the adventures of the League of Extraordinary Gentlemen yesterday, but there are already plenty of annotations and commentaries out there, plenty of lock-picking of literary clues and examination, decoding hidden meaning in every background character.

I’m not having most of that. I’m giving almost all of them a miss (except for the excellent Mindless Ones posts, which at least has some self-awareness of how silly the whole thing is, while also showing an insane willingness to engage with big themes). Playing ‘spot-the-reference’ isn’t as important as it first looks – I always manage to miss 90 per cent of the familiar faces on the first read-through of a new League story. I completely missed the blatant Doctor Who appearances in 2009, and I honestly think Doctor Who is the greatest TV show of all time. But I never feel like I really miss anything, just because I don’t know who Corporal Cuckoo is. (I can still figure out What he is)

The references to literature, film, music and comics are often entertaining, and occasionally bring forward unspoken depths, but they’re not why I follow the adventures of the League of Extraordinary Gentlemen – I follow them because they’re rich and funny, and – as I’ve noted before – they are stories of immortal beings who are living extraordinary lives, and starting to crack under the pressure of keeping it inside the head.

And I follow them because they represent some real humanity at the heart of all fiction, and plead a surprisingly quiet case for building a better world through a bit of kindness, and a lot of compassion. Even if there has to be a lot of blood shed on the way. 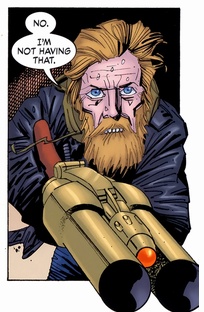 It’s not always easy to spot the humanity amongst Kevin O’Neill’s brilliantly grotesque architecture and equally ugly cast of characters, but it’s always been there in the series – Mr Hyde’s tenderness towards Mina before he dances off to his death, or Orlando’s melancholy as s/he watches the city s/he founded burn in the Blitz, or here at the latest apocalypse, with one of the main characters of the entire series reaching the end he always wanted – as a hero.

Allan and Mina and Orlando are all fictional characters, who are almost aware of their own unreality, and that gives them the sort of superposition that Alan Moore talked about in the Dance of the Gull-Catchers. Allan isn’t just Allan Quatermain, the Great White Hero of Africa, he’s every street-level loser who was once somebody special and wants desperately to do something meaningful again.

As for the rest - Orlando remains, as ever, an eternal warrior, but Wilhelmina Harker, once one of the Absolute Victims of classic literature, has grown into immortality. And while it drove her around the bend for a while, the ultimate victim becomes the mother of a new age, bringing on a new aeon, which is always going to be strange and terrible for anybody used to the old one.

The suggestion at the end of Century – that the New Aeon in the League’s universe is a feminine one, a return to the harsh word and comforting embrace of Mother – brings an end to all those silly little games boys play.

A new female spin on old institutions is no bad thing. After all, it’s got to be better than all those adolescent and macho power plays of people like saddo Haddo and the four-hundred-eyes (and totally banal) Antichrist - all those schoolboy fantasies of holding the world in an iron grip are just pointless, and angry old men have ruled the world long enough. 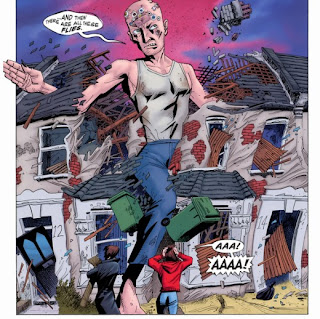 Of course, Alan Moore is also an old man now, showing an old man’s understandable obsession with the end of the world. He’s also a bit out of touch – some of the references in 2009 are so quaintly 2003, and putting Omar’s Dad on the moon in the Baltimore Fun Club, or having Malcolm Tucker spout off on the TV doesn’t hide the fact that he’s more comfortable with older, more lived-in, fictions, and not just because they’re a lot easier to deal with legally.

But Moore is also telling a story about immortal people that also has immortal themes, and doesn’t forget that they while they are glorious fictional creations - heroes and monsters who have lived through the impossible - they’re still just people, with all the mistakes and fragility of everyday life.

It’s often noted that Moore and O’Neill will throw everything and anything into a League story, and there is even a bit of kitchen sink humanity among the metatextual mess. Life goes on for Mina and Orlando and any new recruits to the League, but Allan Quatermain finds some real peace and joy with his last breath, and that’s the kind of touch that keeps more looking forward to more and more adventures of the League of Extraordinary Gentlemen.
Posted by Bob Temuka at 6:36 PM