Silver Surfer: Blinded by the gleam of his heavenly arse 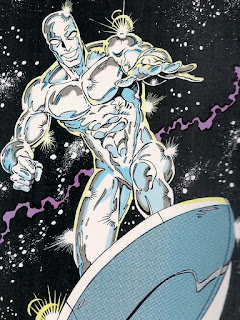 The start of the Surfer's longest-running solo title saw the big man soar away from Earth in the late eighties, straight into a full-on galactic war and immortal vengeance. But with all due respect to the late, great Marshall Rogers, it was all a bit pastel. Steve Englehart's scripts reached for the cosmic, but Rogers' art was always a bit thin, and a bit forced - the artist always looked a little more comfortable with the street-level grime of a Batman story or creepy mood of a DC horror comic.

After Rogers got the series rolling with the first dozen issues, it was Ron Lim - who would draw the character full-time for the next six years - who gave that classic Marvel character a new and thoroughly modern gleam.

Lim was a contemporary of the Image crew, but never quite grabbed same kind of fanboy adoration during that period. His work eschewed the scratchiness of artists like Lee or Liefeld, and was simple and clear, rather more than powerful and exciting. His figurework could be stiff, his design was rarely more than serviceable, and there was a general blankness to his faces that could be off-putting.

But he was perfect for the Silver Surfer in the late '80s and early '90s. While his art couldn't match the sheer balls-out power of previous Surfer artists, he swiftly found a way to make a bald naked bloke covered in skintight metal look visually interesting, and that was by buffing the shit out of the Surfer's body.

In Ron Lim's Silver Surfer comics, every part of the title character's body gleamed and shined, with light bouncing off every kink in his smooth muscles. Lim's Surfer was always a bright source of cosmic light, burning with an inner fire, while his glossy exterior reflected every light source around, bouncing back the cosmic grandeur of the universe back at itself.

When he was surrounded by fire, he would reflect back every lick of flame, looking like a badass humanoid hot-rod from hell, and the light of distant stars would sparkle across his arse as he sailed through the infinite void on his dopey board.

And for all those small limitations at portraying a truly human expression, Lim also did a surprisingly good exasperated or befuddled Surfer, given some emotion to a face without hair or pupils or anything. He was given plenty of chances to do this when Jim Starlin came onboard as writer. As well as resurrecting Thanos after a decade as a statue, Starlin brought a much-needed sense of the absurd to Norrin Radd's meandering through the cosmos, and frequently sent the Surfer to the very limits of weirdness and pointlessness.

But through it all, Ron Lim's Silver Surfer shined on, especially when Marvel started upgrading its paper and printing stock, and made Lim's work even brighter and clearer. It's also little surprise that one of the most successful foil covers of the time used Lim's art to give the Surfer another dimension of gleam on the cover of #50.

Lim's enthusiasm for the Surfer's chrome overhaul was eventually worn down by overwork, and by the end of the last Infinity Gauntlet sequels, Lim was spending too much time cramming a thousand characters into a panel. There wasn't the time to get the Surfer gleaming when he's just one tiny element on the page, and when Lim moved on to other projects, they never shined as hard.

There have been plenty of groovy Silver Surfer comics since then, right up to Mike Allred's wonderfully fluid art. But even with all the improvements in paper and effects, the Silver Surfer has never again gleamed that eternal, not like he did in Lim's hands.
Posted by Bob Temuka at 9:14 PM

Testify!
The cover to no. 50 is a favourite of mine.
For me it’s in a liminal zone between tacky and great.
And there is a second printing with the Surfer in embossed silver AND with black outlines!
Unusual.