The Chaos Monsters: Too cute to live 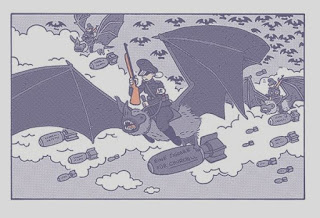 Kiwi artist Karl Wills' art is some of the cutest ever produced in New Zealand. It is enormously appealing at the very first glance, with incredibly welcoming curves and open faces, which all just makes the extraordinarily gruesome violence all the more shocking.

His style has dashes of Winsor McCay and Leo Baxendale and generic Archie comics, with full, flowing lines that are incredibly warm and comforting. It's art that looks like a dream of kids comics, and when things do suddenly go horrible, it's a true nightmare.

His early Jessica of the Schoolyard strips set the template for a lot of Wills' works – impossibly tough girls, simplistic plots, fierce inventiveness in the strange details, hard-boiled dialogue and lashings of the old ultra-violence. It's a strong formula, which works every time.

And in an age of webcomics, digital downloads and expensive hardcovers, Wills still puts out semi-regular mini-comics, which are more like beautifully designed chapbooks. You can buy them here, and they are always an absolute fucking delight, even as they get increasingly disturbing, because you can get away with all sorts of crazy shit if you keep it cheap and nasty.

The Chaos Monsters – Wills' latest mini-comic - is a typical contradiction of gross and adorable. It features a bunch of button-cute female soldiers hanging out in an idyllic Europe, who suddenly start stabbing the shit out of each other, machine-gunning and bombing each other to death, with the survivors inflicting hideously gruesome tortures on their helpless prisoners.

Somebody new to Wills' work is going to get a hell of a shock – it's all going nicely until somebody gets rats sewn into the stomach.

It's still weird to see this mix of the delightful and the horrific. Underground comix have, of course, been mining that rich vein for decades, putting childish cartoon characters through all sorts of depravity, but it still has an impact.

One could only wish the Archie comics would do something like this with their characters – the imprint has made some fairly timid horror comics in recent years, always in a more 'realistic' style, with moody, scratchy art. Doing these kind of stories in the traditional Archie style would be brilliantly jarring.

Instead, it's the mini-comics and their 'don't give a shit' attitude that you have to go for that addictive juxtaposition. It's downright disturbing to see these gorgeously cartoonish people blown to bits, but it bloody well should be.
Posted by Bob Temuka at 4:52 PM