After years of keeping all my comic books safely wrapped up in the usual plastic bags, I've spent the last few weeks methodically going through the whole lot, and ripping them free, and putting them back into cardboard box storage without the offending plastic.

It's taken hours and hours to go through the whole lot and carefully remove them from the plastic, taking extra care not to get all that tape caught on the covers. Towards the end of this industrial effort, I just ended up ripping the bags apart around the comic, because I just ended up with thousands of useless bags – some of them 20 years old and already falling apart themselves. It took me ages to even find out if this huge pile of clear gunk was recyclable.

It's also been enormously satisfying. I should have done this years ago. 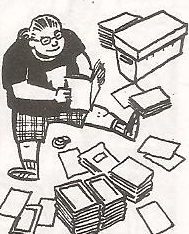 Comic books just look so much sexier when they're all unwrapped, the covers look better without going through a plastic filter and the individual comics I have stacked in the bookcase look like their own little pieces of art, not like something that is sealed away forever, never to be touched.

I'm far, far more likely to actually pick the comics up and read them if I don't have to worry about the tedium of the bag process. It's a tiny effort, keeping all these bags and boards and comics sorted, but it's still an unnecessary effort, and I'm trying to cut back on those.

These things are made to be consumed and enjoyed, so I'm consuming and enjoying them. 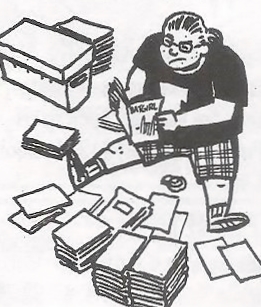 Whenever I got given an action figure as a kid – and I was all about the action figures – I would always rip it out of its container as soon as possible. The latest GI Joe or Walrus Man from the first Star Wars needed to breathe, he needed to flex some of those joints, or he'd never really come alive.

I never kept any figure in its box, never kpt anything in mint condition. The thought literally never even occurred to me, until much, much later in life. The thing was dead if it wouldn't move, but it would come alive as oon as it came out of that packaging.

It means that few of them survived for that long, because they would just be played to death, and if they were lucky, they might go out in a blaze of glory during the fireworks season, (the unlucky ones broke down into a mess of small parts that never added up to a hole, and are stuffed in a box that looks like Doctor Frankenstein's wet dreams). Many quickly lost an arm, although some proved surprisingly resilient – I still have Spock, Kirk and Ilia figures from the 1979 Star Trek film, all in one pace, although the blokes are showing some large bald patches as the paint wears thin. Relatively true to life, then.

But in general they were doomed the moment they were handed over to me. At least they lived for a while, instead of getting stuck in that suspended imagination.

Comic books didn't come in any container, and the thought of putting all of them into nice, safe bags never occurred to me for the longest time.

I still have a lot of those ragged pieces of shit, all of which have lost their covers, and probably the first few pages as well. They're genuinely worthless, but I'm such a sentimental piece of shit that I'm never getting rid of them, no matter how rough they get.

By the time there were piles and piles of comics stacking up around me in my teenage bedroom, and they were all starting to get a bit tattered a few weeks after buying them, I started filing them away in bags. One of the first things I ever bought from a comic shop was 100 of those snug plastic covers and instantly stored away the very best comics, (you know, like 1990's Ghost Rider #1).

Still, putting them into a bag was more than enough. I never felt the urge to get them slabbed or graded or anything like that. That's fine for a certain kind of comic collector, but that's not for me. A grade 8.9 issue of Amazing Spider-Man #14 might be a goddamn art treasure when it's put up on the wall, but it's just as inert as a Cobra Commander who was never released from his packaging.

It's probably just because of the way I've always had my comics quickly deteriorate through over-reading, but I've never really gone to any huge effort to keep comics in mint condition – to the point where I kinda enjoy seeing the look of horror on my local comic shop owner's face when I stuff a bran new issue in the back pocket of my jeans.

I'm still annoyed if I spill my drink over some glorious double-page spread, and the pages rip apart after getting stuck together, but I like them a bit rough and ready – as if each crease has its own story.

My comics are all stored away in banana boxes, and have been for years. They're still the best for stacking and shelving away in the cupboard, and you can get a few hundred issues in each one. I don't obsessively re-read every single comic I buy every time, just once or twice before they go into this storage, so they don't need to go into bags to be protected, and they can all go.

A select few of them are still in bags, because they're already ragged and almost ruined, and at least the bag is keeping things together. The Excalibur comics that I read and reread and reread in 1989, and the Indiana Jones that I was deeply into a few years earlier wouldn't survive much longer outside some kind of protection.

But they're almost all been freed now, and just the physical act of freeing them has inspired me to dig back into things. I've got a pile of Eightball comics I haven't cracked open in years that I've just liberated, and it's past time to see how they hold up.
Posted by Bob Temuka at 9:47 PM