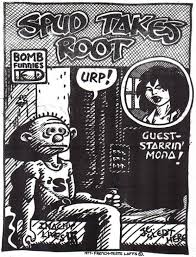 I always had a very primal, very raw reaction to Barry Linton's comics. They were the first proper grown-up comics I ever saw, with some Strips comics courtesy of some cool uncle, and the first place I ever saw cartoon breasts. I wasn't even five yet.

I lost track of Barry's work for 20 years after that, but rediscovered it as a young adult, and fell in love with that thick, flowing line and rhythmic nonsensical dialogue all over again. I couldn't follow the stories completely, but these comics were pure and punk and everything I wanted in art, and an intoxicatingly nostalgic connection to that first young exposure.

He was still doing his own idiosyncratic comics, right up to the end. His comics would pop up in national magazines and newspapers, and his art was always welcome. He could spin endless yarns about a mythical Polynesian civilisation, or about hot and humid nights in the city, sitting around and getting hellishly stoned before a dirty old rock and roll show

Barry Linton died the other day, around about the time Judge Dredd co-creator Carlos Ezquerra also passed away. The Kiwi artist's audience was only a fraction of his Spanish counterpart's, but anybody who was exposed to it could easily see his brilliance, an addictive perspective that could only come from Aotearoa.

Dylan Horrocks did a great strip about Barry a few years ago, and it was just reprinted online here, and there is a lovely tribute from his mate Martin here and they give a tiny taste of the love that is out there for the artist's work.

I only wrote about Barry a couple of times here on this blog, and I somehow recently ended up with some of his original art that was so day-glo wonderful that I just had to share with everybody.

To my eternal shame and regret, I didn't get around to returning that art to him. I was going to ask somebody for his contact details at a comic convention this weekend, but now I'll just have to ask for ideas for what to do with it. It's not mine, and it deserves to be returned.

They'll find a home somewhere. Barry's comics always found their way home again, no matter how wasted they got on a hot Friday night. 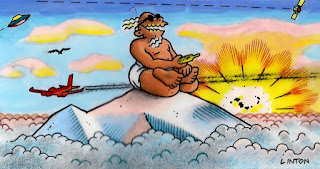 Hi, just came across this in 2021, but if you are still holding on to these I'd love to be able to add them to the rest of Barry's work. I'm his daughter and hoping to do something appropriately celebratory with his work eventually. Cheers, Lily