The speed of Dillon


Artist Steve Dillon broke into the comic industry as a teenager, largely for two reasons - 1) because he was bloody brilliant, with a sharpness to his line that was immediately appealing, and 2) because he was fast as hell.

For a perfect example of both of these attributes, you don't need to look any further than the lost episode of City of the Damned, a Judge Dredd story from the early 1980s where Judges Dredd and Anderson travel a decade into their future to see the results of a predicted apocalypse.

It's a classic Dredd tale, as our heroes overcome the deep horror that their beloved city has become, and save the day by ensuring this apocalyptic nightmare will never come to pass. Like all the great golden age Dredds, it was written by John Wagner and Alan Grant, and featured work from a variety of the comic's best art droids.

These included Dillon, who was a perfect fit for this gritty, hopeless future, and it was all going swimmingly, until the actual climax of the thing, when most of Dillon's art for a crucial episode vanished from the 2000ad offices.

The colour centre-spread was still there, which was just as well, as it was a massively pivotal scene where Dredd gets a bunch of his undead former colleagues to step aside, purely with the use of his own imposing authority. But the rest had disappeared, and under a supreme deadline crunch, Dillon stepped back up and redrew the required four pages in record time.

A couple of years later, the missing art turned up again, and 2000ad readers were able to see and compare the two versions, and it was absolutely bloody fascinating: 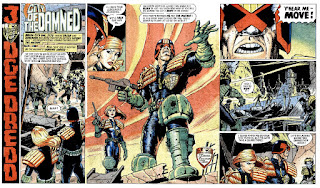 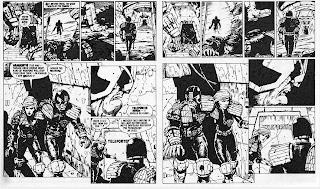 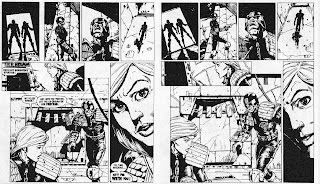 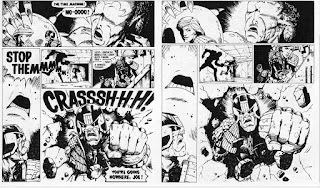 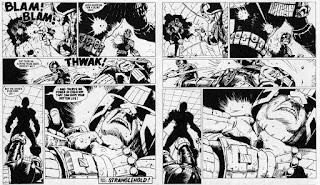 It is an invaluable insight into the young artist's methods, just by looking at the slight alterations made to the story. You can study the difference between the two, (the published version on the left above, and the 'lost artwork' on the right), and try to see if the pressure of the deadline forced Dillon to make any shortcuts, or just take note of the way characters switch sides, or move differently (body language was one of Dillon's great under-rated skills).

Other artists frequently sketch out their layouts beforehand, but it's so unusual to see two pieces of complete and finished art like this. Dillon had already had a rehearsal run on the pages, and even though the replacement pencils were churned out at an incredibly fast rate, they're arguably better, with a slightly tighter focus on some of the figurework, and even more detail - see how the panel where Anderson's face is in shadow on page four on the original, but more fully revealing in the redo, or how the sizes of the actual panel are tighter, or more open.

When we lost Steve Dillon recently, we lost one of the modern greats. His worth is evident in the hundreds and hundreds of pages of comic artwork he did, but you can see it best here in these four pages, quickly whipped up to save the day.
Posted by Bob Temuka at 8:14 PM