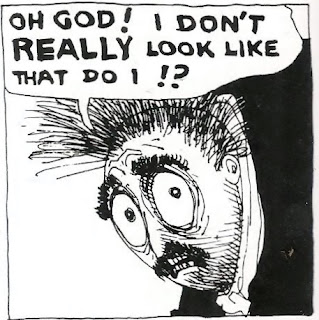 British comics artist Brian Bolland has built up a huge audience of loyal fans with his clean, crisp and consistent line, but it's not always so apparent how completely fucking weird his work can get.

His superhero comic covers show a deep love for the Silver Age style, often relying on some goofy premise played absolutely straight, although sometimes they can still end up in some very strange territory. His covers for Vertigo books such as The Invisibles and Animal Man showed a little of the weirdness behind his sharpness, but for the full strangeness of Bolland, you only have to look at his Mr Mamoulian strips.

The strips aren't as immediately eye-catching as, say, his Camelot 3000 work, with that distinctive and detailed sharpness fuzzed up to hell, and far more of a looser style, with the main character scratched into existence on the page. Occasionally, that familiar style will shine through, particularly when one of the attractive female characters in the strip shows up, but it isn't always so obvious that this is the same artist behind the Killing Joke.

This is not a bad thing - the effect is like looking at the 24-hour comics that several creators have taken a crack at, and it's a more immediate, and far more personal, window inside Bolland's thought-processes and feelings. It's certainly more real than his joyful renditions of the Flash or Wonder Woman, (although these certainly have their place).

It's total stream of consciousness storytelling in the Mamoulian strips, following the title character as he sits on park benches, has a cup of tea, or lies awake in existential dread in the middle of the night. Published in a variety of places over the years, and occasionally collected together, it can all appear a bit random and bizarre, but you get to see right inside Bolland's head like nothing else he does.

And, god bless him, it's a strange place in there. There is Bolland's obsessions with beautiful naked women, and bone-deep concerns about how he is objectifying them. Sometimes it gets completely nihilistic, sometimes it features a sizable cast characters all baffled by the complexities of modern life, and sometimes it all gets a bit Francis Bacon.

There is a grim sense of humour beneath all this modern misery, just enough to bring some life to the proceedings, and it runs from sheer slapstick - a mannequin's leg is a frequent prop - to grim irony over how fucked up everything is getting.

His ultra-detailed versions of characters like Judge Death and the Joker set the absolute standard, and that's enough for most of us. But dig a little deeper into the world of Mr Mamoulian, if you want to see the horrified stare behind those frozen grins.
Posted by Bob Temuka at 8:10 PM

I seem to remember reading somewhere that he didn’t pencil these, and did them as quickly as he could. This was his own reaction to the painstaking, precise, time consuming process and pace of his usual work. These still look great to me, and as you say, are a great look into his state of mind.
Mattb