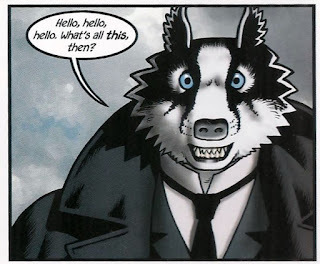 In the afterword for his fifth and final Grandville book, ace comic creator Bryan Talbot reveals that part of the reason he's packing it in is that it takes him so bloody long to do each book. With the benefit of digital art editing, it can take him up to 40 hours to do a single page, because he's a total perfectionist who can't resist tinkering with the image over and over again.

The results are right there on the page - Force Majeure shares with the other Grandville books a lush, vivid and exciting visual sense - but it's a tonne of work for the artist, and he's earned the right to do something different now.

After all, that 40 hours doesn't even include all the time he spends setting up the plot, and while each of the Grandville books has had a complex story, with a huge amount of detail and incident, Force Majure is particularly dense as hell, full of dodgy dinosaurs and dense deductive reasoning.

There are also doppelgangers and double-crosses and clandestine escapes and fake deaths and long-simmering conspiracies going right to the top of the bureaucratic pole. There are cracking headbutts and huge gunfights and old mentors lured out of retirement, for one last case. There are several different big mysteries going on at once in this volume, and still room for extended flashback sequences and miniature stories within stories - all perfectly balanced with the fine craft of a clockwork watch.

And, as always, there is loads of violence. The latest story in Talbot's anthropomorphic phantasmagoria of an alternate world is kicked off my a terrible act of violence at a restaurant - nobody quite captures the horror of a machine-gun massacre like Talbot - and ultimately leads to the familiar sight of Detective Inspector LeBrock of Scotland Yard strapping on his big fuck-off guns and unleashing some righteous vengeance on some nasty fools.

Despite a few 'all is lost' moments -and an astronomical body count - Force Majeure ends the Grandville series on a fairly optimistic note. Each book was getting progressively darker as the grim secrets of this alternate world and its complicated society were peeled away, ultimately leading to the decidedly grim previous volume, which revolved around a hidden and ancient genocide of the dough-faced human species, by other bipeds desperate to hide the fact that humans were the original Adam and Eve in the bible.

With the anticipated finality of this last book, there is definitely added peril when LeBrock admits that he is unlikely to come back from this climactic confrontation - there is a good chance this tough old badger really will fall this time. Anything could happen, and it looks increasingly likely that it's all going to go very bad.

You'll have to read the book for yourself to see if LeBrock digs himself out of this particular hole, but you can be reassured that it's a suitable and fitting ending for the Grandville story. You wouldn't expect anything less from a comic crafted by Bryan Talbot, who has been delivering the goods for decades, and the bitter taste of no more future Grandville books is made all the sweeter by any potential new stories from the artist.

After all, there aren't many of his contemporaries who can manage to make this kind of complex storytelling and dynamic art look so easy, even though he has been labouring over the finer details for bloody ages.
Posted by Bob Temuka at 8:48 PM