My Friend Dahmer: The absense at the heart of the story 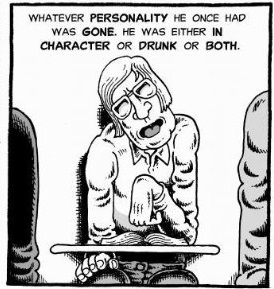 A frequent complaint about movie adaptions of books and comics is that the cinematic versions don't really get into the heads of their characters, not like the printed versions of the story can. That you can't ever really know a character's real thoughts and motivations when everything is so superficial on film - all surface, no feeling.

But sometimes, you might not actually want to understand the person at the heart of a story, because they're just so horrible, and sometimes, there's not even a real person there anyway.

Derf Backderf's My Friend Dahmer comic is an outstanding work by an incredibly talented creator, who just happened to go to high school with one of the most notorious serial killers of the 20th century. Jeffrey Dahmer raped, murdered and mutilated 17 people between 1978 and 1991, but before all that, he was just the class weirdo, putting on a desperate act to get any sort of attention. Even monsters have to go to high school, and Backderf was there too.

The brilliance of Backderf's book is that he plays it totally straight - he tells it how he remembers, with just a taste of things outside his experience, supplemented with small parts from other sources. Hie comic shows the strange behaviour that would ultimately lead to such horrendous murder, but never really judges the dumb kid who will become a terrible monster.

It's an extremely accessible story - I'm pretty sure it's the only comic book my sister-in-law has read in her entire life - with a unique perspective and Backderf's hilariously stiff and elongated caricatures keep it all from descending into total darkness.

Unsurprisingly, a film version of this story came out this year, to a generally positive reaction, and is a fairly accurate adaption of Backderf's comic, hitting all the right beats.

But it also loses something, by making Dahmer the main character of the story, showing lots of moments where young Jeffrey is staring creepily off into the distance, or closeted away with his roadkill 'experiments', or hanging out in the woods, watching possible future victims jog past, unaware of any danger.

In the book there is really is no proper attempt to understand Dahmer, or offer up some lame explanation for why he did the horrible things he did, while the movie, as well-intentioned as it is, can't help but be a Portrait Of A Serial Killer As A Young Man.

In Backderf's purer version - even with the supplemented material - there is a giant absence around Jeffrey Dahmer, and it can be seen in the way nobody ever does anything about the fact that he's coming to school smashed on vodka, or pretending to throw a fit. Nobody cares, nobody does anything.

That lack of caring about Dahmer and everything he does is one of the most horrific and despairing things about the story, and awfully familiar to anybody who has grown up in modern society. We alll know somebody who could have turned out to be a Dahmer. There was always somebody. Hell, when Backderf hears the news about his former classmate, Dahmer isn't even the first person he thinks of.

Ultimately, fuck Jeffrey Dahmer, who had to slaughter innocent people for his own perverted pleasures, and no amount of low motion walking around to a period-appropriate and tasteful soundtrack is going to change that. He's the void at the heart of the story, and it's everything that happened around him that needs to change if we're going to stop more living nightmares before they get started.