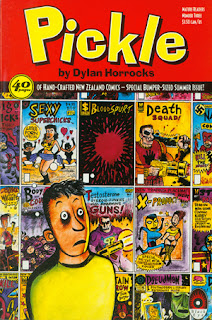 My local comic shop had a kilo sale this past weekend, selling off the dregs of recently-bought collections by weight - $20 a kilo, which actually works out to be about $1.20 an issue. Bargain.

In this comic-starved country, I go a little crazy at these kinds of things. It was actually a little reassuring to see there was already a line waiting to go through the two-dozen comic boxes when I arrived five minutes after it started, because it's nice to know I'm not the only fucking dork around here that does this sort of thing.

There were huge runs of great stuff I've already got - vast amounts of the Ennis/McCrea Hitman, almost all of the late eighties Justice League and loads of old-school X-Men. There was also tonnes of trash - endless and pointless Ultimate comics. huge amounts of licensed character dreck with a tiny, fanatic fanbase.

Most of the things I buy now are small, dedicated comics. The slightly weird, the quirky shit and more than a few exercises in base nostalgia. These are the kind of things I get when I buy three kilograms worth of comics nowadays:

* All of Marvel's original Contest of Champions series and half of the trippy Havok/Wolverine Meltdown mini.

* A surprisingly large amount of Dylan Horrocks' Pickle comics, which apparently used to sell in chain bookstores around here.

* The first issue of Englehart and Rogers' Silver Surfer, and now I feel bad for passive-aggressively trashing them the other day, because this is cosmic as fuck, man.

* Every issue in the Three comic by Gillen, Kelly and Bellaire.

* Three-quarters of a Mark Millar comic, and some of Grant Morrison's Klaus.

* A couple of Kirby's Losers issues, and some Galactus reprint thing by the King.

* Some more of Bendis' fairly recent X-Men comics. I just really, really like the art teams they had on those stories.

* A lot of beat-up-to-shit bronze age comics from the 70s and 80s - a few Fantastic Fours, some of Starklin's Captain Marvel, a Strangest Sports Stories Ever Told, a War of the Worlds, one Haney/Aparo Brave and the Bold, half of Barry Windsor-Smith's Machine Man series and a Fantasy Masterpiece or two.

* A couple of issues of Alan Moore's Providence. I only get it cheap, because of that fucking art.

* Three issues of Rob Liefeld's New Mutants, which were terrible comics when I got rid of them the first time, and are still terrible comics now, but bloody hell, it's nice to feel like I'm 16 again.