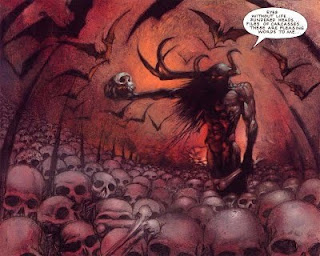 The personal memoir is a great way to settle scores and get even, and even though Pat Mills has been doing plenty of both in his long and brilliant comics career, his new self-published memoir about the "secret history" of 2000ad is Mills' best opportunity to really tell his side of the story.

It's no exaggeration to say Pat Mills changed the face of British comics. He created 2000ad and was a major developer in the character of Judge Dredd. He has written and commissioned some of the best stories ever published in the UK, and formed fruitful long-term alliances with artists like Kevin O'Neill. He co-created the wonderful Marshall Law, and detests super-heroes as total fascist bully-boys. He still writes great comics for 2000ad to this day - his Defoe, Greysuit, Flesh and Slaine comics are still a vital ingredient in the ever-changing make-up of the galaxy's greatest comic

All of this is fully covered in Be Pure! Be Vigilant! Behave! - the title comes from the catchphrase of Torquemada, the biggest douchebag ever created in UK comics - with Mills going back over his long career, and revealing the stories behind the stories. There are dozens of fascinating anecdotes in the book about his long association with the comic industry, and he goes particularly deep on the earlier phase of his career, when he was first creating 2000ad.

As well as writing about who created what and revealing details of some of his many battles with management, Mills also makes some compelling arguments for the difference between the creator and the developer of a major character, recognising that both have an important part to play, but that there really is a distinct difference.

Mills - who has been fighting the good fight since before you were born - fills his stories with working class heroes, and usually has empathy-lacking toffs as the bad guys. In his new book, he reveals that he doesn't just talk the talk when it comes to sticking it to the man, as he spends a large amount of the book explaining the injustices of the current system, especially in his home country. The fury he feels when creators are routinely screwed over by faceless management who can only find beauty in the balance sheet is all right there, radiating off the page.

Mills' prose style can become something of a rant against the fuckers and fools who get in his way, but it doesn't overwhelm the text. It also helps that this isn't a dry, academic trawl through his bibliography - it is roughly chronological, but bounces back and forth in time as Mills often gets sidetracked into explaining a pet peeve or some ideological injustice, or follows his relationship with a character or a fellow creator all the way through.

After all his years in the industry, Mills has some definite and fixed ideas on what makes good comics and how creators should be treated, and has a few harsh words about editors who keep giving in to the demands of fanboy culture - Mills likes his fans on the individual level, but is appalled when they join a nerd hive-mind and decide on the direction of a comic, away from a mainstream audience who might save it.

Mills also has a go at the unfortunate treatment of former co-writer Tony Skinner, just because he was a full-on, balls-out witch; and frequently refers to the dark period of 2000ad (although this is still a debatable point - I personally think it started in the mid 90s, a lot earlier than Mills believes - but the beauty of reading a book by somebody with such strong opinions is that you're never going to agree with them on everything).

But still, even with all his fiery rhetoric, Mills is a bit of a softie at heart - laying down praise for fellow writers like Gerry Finley-Day, or talking up the efforts of current 2000ad editor Matt Smith. He's also surprisingly willing to bury the hatchet with someone if they apologise. One former editor with whom he had some very public clashes gets off lightly in the book, largely because he took the time to write an apology for the way he dealt with Mills during his tenure as Tharg.

Mills refusal to slag off somebody who has made amends means this book isn't as comprehensive as it could be, but again, that's part of the charm. Mills knows what makes a good story, and that's more than enough.
Posted by Bob Temuka at 6:55 PM