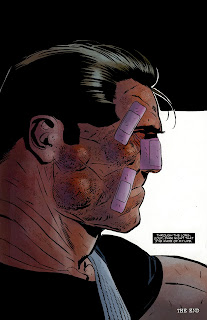 The Punisher is a fucking nightmare. A relentless killing machine who has slaughtered thousands of people, and a fanatical gun nut whose mad obsession with revenge goes against everything a decent civilization should aspire to. He's the American dream, gone sour.

Unsurprisingly, there have been a shit-tonne of terrible Punisher comics, ones that try to justify this twisted philosophy, or are too superficial to even consider the possibility. But there have also been some great Punisher comics, and they usually get there by taking one of two paths.

The first is to go over the top and full-on crazy, and embrace the absurdity of this crazy old bastard's unstoppability. Frank Castle works as a total cartoon because anyone who tried to emulate him in real life would last a day and a half before taking a bullet to the face, so turn the dial up to 11 and let him loose. The more outrageous the story gets, the better, and some of the great Punisher comics have been damned outrageous.

The other way to do it is to take it all dead straight, but ensure that the Punisher is totally self-aware, like a character in a Michael Mann film. Those characters often, at first glance, appear to be little more than superficial cliches, but they're all so self-aware of what they are and what they do, they come across as real people.

Sometimes - though not often - Frank Castle sees his reflection in the mirror and recognises himself for what he is. A man whose soul and compassion have been torn away, leaving only the will to continue. A husk of a human being, incapable of feeling or empathy because he has locked it all away. Sometimes, the Punisher sees the long, cold dark night he has made of his life.

The latest TV iteration of the character has flirted with both of these aspects to the Punisher. It's gone for the spectacle, while also showing that this is a deeply broken man inside. But it hasn't really embraced any one philosophy, and this kind of ideological cowardice makes for bland storytelling. Shit or get off the pot, show some spine. Tell us who your Frank Castle is - there are extra points if you can come up with a third path to make him a tolerable character.

It's genuinely appalling to see people like law enforcement officers unironically use the Punisher's iconography on their vehicles and uniforms, because they seem to be learning all the wrong lessons from Castle's classroom. He's got so much else to say, if you can hear him over the gunfire.
Posted by Bob Temuka at 2:09 PM