31 days of nerd heaven #9: Drunk as fuck at From Dusk Till Dawn 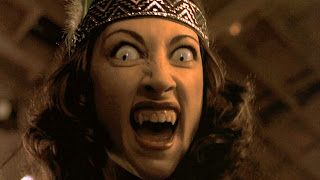 I used to make a habit of going to the movies while completely shitfaced, which never really worked out as well as I planned.

But I was stone cold sober when the funniest drunken moment I ever saw in a cinema happened. It was a late night screening of From Dusk Till Dawn, on the first weekend it was out, and the dude who slumped in his seat two rows in front of us was obviously off his tits. He seemed to fall asleep pretty quickly, and you could hear him quietly snoring during the tense hostage drama of the first half.

And then the vampires showed up, and that woke Drunkey McDrunk the hell up, because just as situation in the Titty Twister devolved into bloody carnage, he sat bolt upright in his seat and screamed out ‘WHAT THE FUCK?!?’

Nobody had told him about the vampires, and he obviously thought it was just another crime drama, like all the other Tarantino knock-offs at the time. Until it suddenly wasn't.
Posted by Bob Temuka at 1:57 PM