31 days of nerd heaven #26: New roads open up at the airport 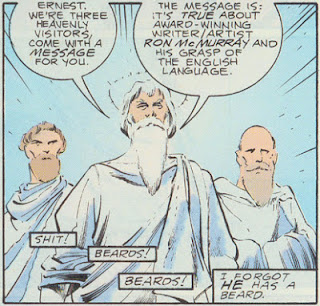 It’s all very sad, saying goodbye to my big sister, who is off to live in Australia for a few years, but after saying goodbye at the gate, I am heading straight for the airport bookstore, because holy shit, it’s a DC motherlode in there.

For some reason, the bookshop there has a tonne of DC comics from the past few years, all going super cheap, and it’s not just the junk, it’s all the great, weird late ‘80s/early 90s comics, and a large chunk of Armageddon 2001 annuals.

I’m all loaded up with asparagus-picking money and go a bit crazy and buy heaps of the slick new thrills. Most of these comics never come close to my little corner of the world, and this is the first time I’ve ever seen a lot of them.

That’s where I first read my first issue of Sandman, and my first Hellblazer, and the first Doom Patrol.  They’re only bite-sized chunks of these brilliant comic sagas, but it leaves a huge hunger for more that is still barely sated.
Posted by Bob Temuka at 2:00 PM