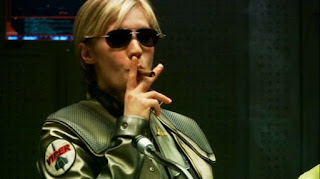 My relationship with the lovely wife started as a long distance relationship, which meant we spent a lot of time on the phone for a couple of months, before she made the ultimate sacrifice and moved to Blenheim with me.

At the time, Battlestar Galactica had just been rebooted, and was playing on Friday nights, and the soon-to-be wife would always ring up 10 minutes into a new episode, and I would completely miss what was happening. I got so lost, I gave up the series altogether, and didn’t catch up on this missing episodes until after the series had ended. Even though I was really enjoying the show, I gave it up without a second thought, because some things are more important than some TV show.

Spending a Friday night watching Battlestar Galactica is a fine thing, but sometimes a boy just needs to get out of the house and meet some girls.
Posted by Bob Temuka at 2:26 PM