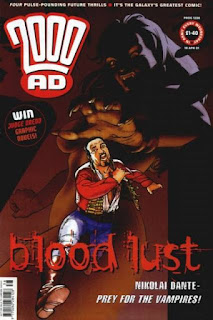 Sometime in 2003, I visit my little sister in Sydney, and it's great to catch up, and the short holiday gets even better when I find a bunch of 2000ads going cheap at a second-hand place in the centre of town.

I'm in a peak 2000ad period, and especially obsessed with the latest deepening of the Judge Dredd and the balls-to-the-wall thrills of Nikolai Dante. So I'm trying to snap up all the issues I've missed over the past eight years, a task that is proving surprisingly difficult, and when I see ones that are only a couple of years old, going for an Aussie buck each, I grab a fucking shit-ton of them.

To be more accurate, I end up walking out of there with about seven of eight kilograms worth of comics, which isn't a big deal, until I remember that my sister's place is a good few kays away from the train station, and I gotta walk there in the early summer heat, because I've blown all my cash on comics.

There have been a couple of times when being a total fucking nerd has almost got me killed, and this was one of them. I sometimes think that if I die and go to hell, it will all go a bit Sisyphus, and it will be something like that endless fucking walk along baking Sydney streets, carrying a dead weight of printed paper and getting weaker and weaker, and getting to the end of the journey, only to discover they were a bunch of issues I already have.
Posted by Bob Temuka at 2:30 PM