31 days of nerd heaven #24: Bonding for life over the Judge Child 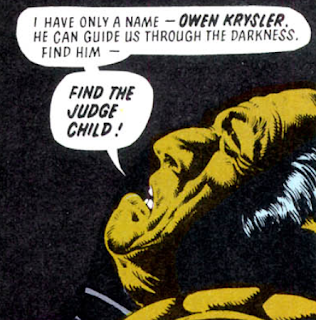 So this kid Kyle, who I’ve just met after starting Miss Green’s class at Temuka Primary in early 1985, he reckons he’s into comics too, and says he’ll lend me the issue of the Judge Child Quest, if I want. He seems pretty cool.

Thirty-three years later, we’re still incredible geeks about things like Doctor Who and the X-Men. We’re a hell of a lot older now, but when it comes to this shit, we never really grew up.

The other week we went for an eight-hour drive just to go check out the comic book possibilities of Dunedin. He still seems pretty cool.
Posted by Bob Temuka at 1:57 PM