31 days of nerd heaven #7: Back of the bookstore 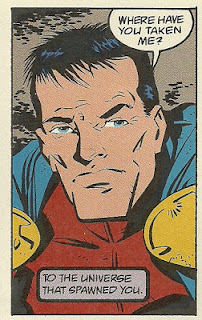 I was buying an issue of John Wagner and Cam Kennedy's Outcasts comic from the second hand bookstore on Sydenham Road in Christchurch, when the owner told me that if I was interested in comics, I should check out what he had in the back.

That usually meant a pile of worthless Eagle or New Universe comics, but it turned out the dude used to own a comic store in town, and all of his back issue stock, mainly from the late eighties, was still piled high on the shelves in the room out back, all for sale for a buck fifty each.

I went a bit crazy that first day, finally finishing off painfully incomplete runs of the slightly esoteric comics from that period, and taking a stab at all sorts of series I’d never even read before.

That craziness didn’t die down for a while. It was hot as hell that whole summer, but after cooling off at the beach, I would spend hours in that cramped, stuffy room, dropping sand everywhere. The shop is long gone now, the building another victim of the city’s devastating 2011 earthquake, but that moment of walking into a room full of weird, almost unsellable comics was the best moment of the summer.