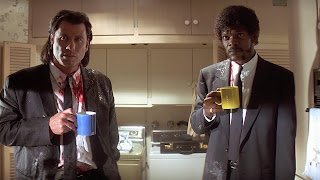 If my young man movie obsession ever peaked at one particular point, it was probably the day me and Anthony drove up to Christchurch on a Sunday to watch Pulp Fiction twice.

Antz was just as much a movie freak as I was at that age - at its worst, we would later compete to see who could see Escape From LA at the cinema the most - and we were both definitely on Team Tarantino after Dogs had blown our minds. When it opened, it wasn’t playing in our home town, so we had to drive 200kms to see it, and we didn't hesitate.

We saw Pulp Fiction for the first time at 10am on a Sunday morning, and since we had made the effort, went to four other films throughout the day. I honestly can’t remember what the other films were, (although I have a sneaky suspicion one of them was Linklater’s Slacker), but when we were about to head on the long drive back home, Antz suggested going back and seeing Pulp for a second time late in the day, and I couldn’t argue with his plan.

In the end, we didn’t get home until well after midnight, and it was hell getting up for work the next morning, but it was totally worth it. I’d never seen the same film twice in a theatre in the same day, and haven’t done it again since, but Pulp was always worth it.
Posted by Bob Temuka at 1:28 PM