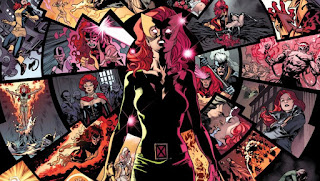 My undying adolescent obsessing for all things X-Men died off fairly easily in the end, killed off by the endless trash that flowed out of Marvel after Claremont left. Other than the usual spurt of Morrison, I haven't really bought any X-Men comics for decades.

I've managed to keep up with the soap operatics of the whole thing – largely through my oldest mate Kyle, who still gets the Uncanny X-Men every month – but interest has steadily declined, to the point that right now, without looking it up, I have no idea if Cyclops is alive or not, or even how he died in the first place.

But I've still got a lot of time for Brian Bendis' run on the title from a few years ago, even though it was full of the various Bendis issues – there was a lot of waffling and padding, huge amounts of plot threads that went absolutely nowhere, clever-clever dialogue that just went on and on, and a massive anti-climactic feel to the whole thing.

And yet, while I didn't get any of these comics when they were coming out, I still buy those issues when I see them going cheap, and nearly have a full set of his Uncanny and All-New comics, (which is easy, because they're a fairly limited run). And it's mainly because they're so bloody beautiful.

Bendis – for all his faults – is a hugely successful comic writer because he always attracts some of the best artistic talent. Like Mark Millar, a contemporary, his stories can be thin as ice, but the visuals he gives the artists to draw attract the very best talent, and his X-Men comics have art from scorching talents like Immonen, Bachalo, Irving, Asrar and many, many others. Who cares where the story goes when it looks this good?

Some of his new Superman comics feel a bit off because they are so much in the DC house style of 13th-generation Jim Lee rip-offs, jarring against his usual techniques and goals. His artistic collaborators need to be shiny and solid, and his X-buddies brought plenty of that to their work.

Did you read the Joss Whedon run? If so, how did you feel about it?

Well, I always like Cassady's super-slick art, so it's worth it for that, and Whedon does some nice stuff on a craft level, but I never really have much time for that kind of 'we're taking things back to basics!' approach. After Morrison's attempts to move things forward, it just felt like another huge step back.