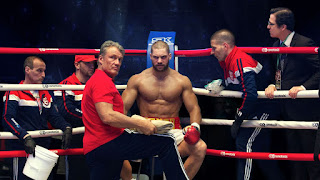 There's something wrong with a Rocky movie when the giant white trash bad guy from Russia is fighting for something bigger than the American champ, but that's still what happened in the last one.

Michael B Jordan is a fantastic actor, who sells the hell out of his emotional anguish in the movie, always giving it his all, but his character is still living in a gorgeous apartment, with the luminous Tessa Thompson at his side and a baby that is cute as shit (attempts to sell the kid's deafness as a quiet tragedy fall flat). Meanwhile, the Russian bruiser is working in a cement factory and living in a crappy apartment with his broken-down Dad, with a Mum who walked out on him and nobody to cuddle. The poor bastard deserves a break.

And the only emotional beat that really works is on that side of the fight, when Dad throws in the towel, because he knows his son will have to be killed before he gives up. That's even more powerful than the moment when the Rocky theme kicks in and Creed gets his shit together, so something is definitely wrong here.

It certainly undercuts the racial aspect of the overall story - Creed the Younger is still battling with institutional racism as much as any beefy fucker in the ring, but when he's Superman, his natural superiority over everybody doesn't help with any empathy or identification.

Still, while Drago II loses the fight like we all knew he would, he still would've got a massive payday from the effort, and has only just started on a lucrative career, so he should be able to stop working at the cement factory. There's no sad endings here. Everybody still gets paid.
Posted by Bob Temuka at 9:25 AM