Something to do with death 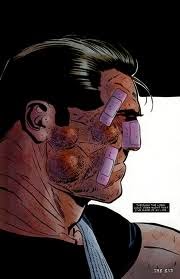 Finding out what the 'long cold dark' really was on the final page of the Punisher story of the same name by Garth Ennis and Goran Parlov is one of the biggest gutpunches Ennis has ever delivered in his long writing career. It's not a fancy way of talking about the oblivion of death, it's talking about the Punisher's life.

I can only assume all those motherfuckers who use the Punisher logo  - for their crossfit ads, or etched into combat gear, or painted onto the hood of a moronic muscle car - know that the symbol they're adopting features a main character who has a void where his life should be, an unending hate that will never end, and can only lead to a violent death, and he's aware of it, and can see a life beyond all that which he can never reach because he is trapped in an impossible and hollow pursuit.

I'm sure they all know that.
Posted by Bob Temuka at 9:46 AM