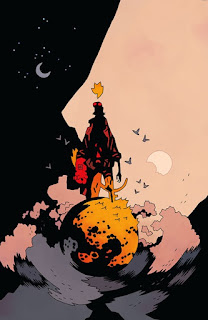 There are only a couple more issues of BPRD left, bringing the entire Hellboy saga to a definitive end, and things are looking pretty fucking grim right now.

The Hell On Earth ended on a note of quiet optimism, but it was a false spring, and the apocalypse that has been promised since the start of the entire series is actually here. There have been plenty of glimpses of the future since the first Hellboy stories, and many ancient prophecies about the future of mankind being underground, but it's still shocking to see everything collapse so absolutely.

Monsters walk the earth, and there is no place for humans. CNN has gone off the air forever, the BPRD airship has crashed and any hope resides in the few survivors that can get to any safe haven under the earth. This was always going to happen, but it's still a sombre note that this time has finally come.

There are still those last few issues, and there might be some massive fake-out, and maybe Hellboy and Abe and Liz will save the fucking day after all, and everything is going to be okay, but it's not looking good.
Posted by Bob Temuka at 11:42 AM