Rock and roll all night with the Bride 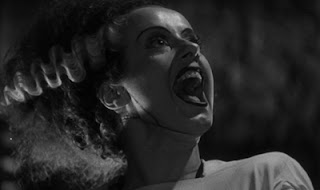 It was 1990 and I was 15 and it was the first night I ever stayed up until dawn. I'd been watching the latest Royal Rumble wrestling bash, but it really kicked off with Bride of Frankenstein. It was the late-night Friday Frights movie on TV2, and when it finished it was close to two in the morning, I watch the Goodnight Kiwi close-out, but I didn't feel tired at all, so I just kept watching video tapes until the sun came up.

I watched Robocop, because that was my absolute #1 go-to movie at that age, and I watched the 80s adaption of George R R Martin's Nightflyers, which I can't remember anything about, except a scene where somebody gets sucked out into space. I have a long-running and unlikely phobia of getting sucked out into space.

Back in the real world, the sun was coming up. My Dad got up early, saw that I'd been up all night, and said I was a bloody idiot. My Dad was right about a lot of things.

I stayed up all night a hundred times over the next decade and a half - watching movies or partying it up or flicking between music videos or roaming the hills between towns or speeding off my tits or playing video games or doing all of it at once - but I never forgot what I saw that first time.

I've only stayed up all night two or three times in the past 20 years. I'm not that stupid anymore.
Posted by Bob Temuka at 11:06 AM