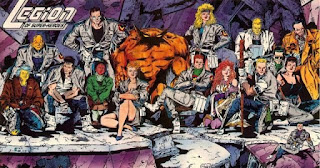 Even though the only version that really matters to me is the 5YL crew, it's still weird that DC hasn't published a Legion of Super-Hero comics in years. How hard can it be to get super-kids in the future right?

The editors have made it clear that they're struggling to come up wth a decent hook for a new comic. There have been at least three reboots of the whole thing in the past 20 years, which hasn't helped. Especially when each one eventually ran out of energy, and usually end up regurtitating LOSH stories from years ago in the most generic way possible.

But if they want to take the Legion forward, maybe they should stop with the sprokin' reboots and take things forward. Set up a whole new Legion another thousand years down the line, in the 40th century, where a new generation aren't just competing against the golden age of the 20th century, but the legacy of the original 30th century crew.

Legion comics have been spinning their wheels for years now, continually messed up by timeline shnanigans in the wider DC Universe, and is continually stuck in the pattern of doing the same Earthwar/Mordru/Great Darkness stuff, over and over again. Taking it forward might be the only way to get something new out of it.
Posted by Bob Temuka at 9:09 AM