The Beastie Boys Book: They still got it going on 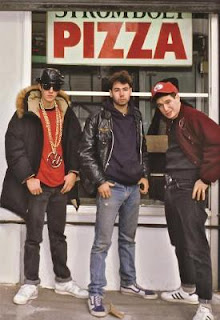 There are two obvious ghosts hovering over the recent Beastie Boys book. One is the tragedy of Adam Yauch's early death, and the surviving Beasties barely get through a page of this huge book without dealing with that grief, something they do with love and humour.

The other thing haunting their long career is their own youthful stupidity. We were all young and dumb once, but most of us didn't do it in front of millions of people, and they can't just sweep it under the carpet like the rest of us.

And to their credit, they own up to it all as they tell the story of making music as young men in 1980s New York. They don't absolve themselves of the deeply shitty way they kicked Kate Schellenbach out of the band, and they know that while they were desperately trying to be ironic when they played beer-swilling meathead frat boys, anybody who plays that role becomes that role to most people watching them.

Still, they've constantly apologised for their shitty treatment of women, and of their lyrics and language that could be heavily sexist and unthinkingly homophobic. At some point they move on, and so should we.

It's a massive book, but it isn’t a daunting process getting through it, even though it’s hundreds of pages long. Like their music, the writing from Mike D and Adam H is free-wheeling and witty and introspective and funny as fuck. Brief interjections from famous friends, including a Major Writer or two, try to capture that same tone and fail completely, and show something else their writing has in common with their tunes - it looks so easy to do it, but it ain't.

They’re just really good at telling anecdotes and stories about some crazy fucking times in their lives, and are always honest about facing up to their own stupidity and ignorance, and that makes it one of the few music memoirs worth spending time with.
Posted by Bob Temuka at 9:38 AM