Avengers/JLA: I still have no idea what is going on 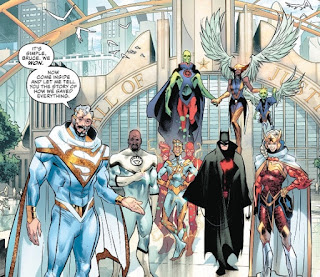 I haven't been able to follow the grand mega-continuities of the Marvel and DC universes for some time now, and I am constantly unsure whether characters are even dead or alive in current continuity, or where all the various versions of the same people came from.

That's fine, I've discovered in recent years that there really is a limit to how much of this pointless trivia I can get in my head, and I've been able to let the idea of keeping track of a grand mega-saga go. Life's too short.

But now I can't even follow a lot of the individual books, something that was brought painfully home recently by my inability to comprehend the latest versions of the big team books put out by the Big Two. Even when things have been getting chaotic in the wider universes, there has always been a main Avengers or Justice League comic to read, and they've usually been relatively easy to follow. But the latest iterations from writers Jason Aaron and Scott Snyder have just left me baffled.

They are still comics produced by skilled creators, with moments and dialogue that are witty and exciting and intriguing, and a lot of their artistic collaborators contribute work that is dynamic and energetic, but threads are left dangling for other series to pick up; characters come and go without any indication of what universe they even come from; and they're both so threaded into the larger picture that they're losing their own individual brush strokes, where the interesting stuff happens in these types of comics.

They're also focused on giant 50-issue arcs, so nothing gets resolved for literally, and it's all set-up. I had similar problems reading Jonathan Hickman's Avengers run and never got to that resolution, lost in endless wheel-spinning. But that seems to be the pattern that everybody is now following.

These thing do gather a sizable audience who seem to be willing to do the necessary homework, but I don't have the time, money or inclination to do all that. Comics about the world's greatest superheroes shouldn't be this hard.
Posted by Bob Temuka at 9:57 AM