Kill Bill: I got bloody satisfaction 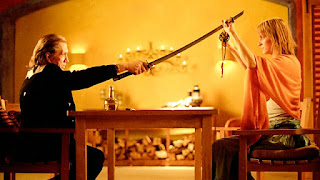 After his six-year break, there was no hesitation or second guessing from Tarantino, and the director unleashed his Kill Bill saga. The break did him good, and he's so self-assured in his epic tale of the Bride's roaring rampage of revenge, and so eager to show off, and comes out with two films that are incredibly vibrant and utterly idiosyncratic, even as he plunges into film history for endless homages.

It's obviously Tarantino's break-up movie, it's not even sub-text, it's just text. But volume two is also one of the very first movies I ever see with the lovely wife, when we're both in journo school and before we've even hooked up, so I think I missed the point of the film a bit.

Fifteen years later, we're still going to the movies together, and I think Kill Bill v2 is the most romantic film in history.