Ezquerra and the two-shot 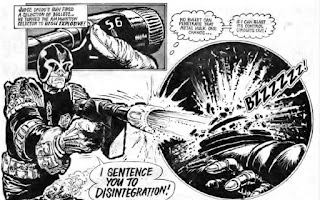 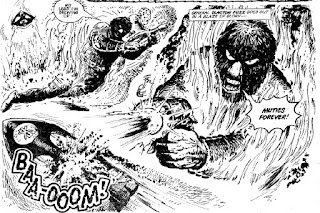 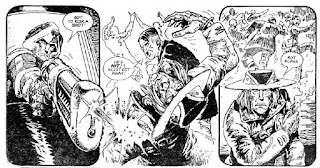 Carlos Ezquerra is rightly remembered for his chunky, scratchy iconography, but during a lifetime of war and science fiction comics, he also proved to be an incredible action artist. His heroes were always standing tall against various villainous scum, and springing into action with guns blazing.

One tiny thing he had in his artistic arsenal can be seen in the above scans - he would have one character firing a gun,into the next panel, where you would see it impact. But it was never a straight line across the panel gutter, it would always come in on an angle, or cut out the distance between the two, or zoom in on the unfortunate target.

And it was always so clear and easy to follow, and there was never any confusion about what was going on. Doing this kind of thing can be delicate work, but Carlos always had an eye for that kind of detail, and always made it awesome, while looking so effortless.
Posted by Bob Temuka at 10:13 AM