Jackie Brown: My ass may be dumb, but I ain't no dumbass 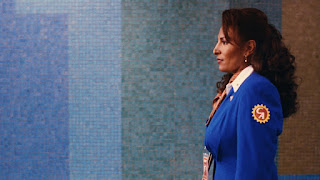 After the blinding double-punch of his Tarantino's first few movies, Jackie Brown was so understated, it was more shocking than a dozen Mexican stand-offs. It's such a mature film, and looked like a movie made by an 80-year-old who didn't give a fuck anymore. Sweet monochromatic suits were out, polo shirts and pastel pants were in, and even the mighty Samuel L Jackson can't make those Kangol hats look so fucking dated.

It's not just that the characters are older, but that the director doesn't care about that the cool factor anymore. He still offers it up in several key sequences, but also sets the major setpiece in a local mall that looks exactly like your local mall, boringly familiar.

The high-octane injection into cinema of his first two features means a lot of people weren't ready for that, and there was a small backlash. Nothing outright nasty, but more of a shrug.

It took him six years to make another film and that might not be that long, but after three deadset masterpieces in five years, the lack of Quentin was noticeable.

Luckily for everybody, he wasn't done yet.