I have no idea what is going on


When DC first announced Crisis on Infinite Earths, somewhere in the 1980s, one of the most repeated rationales for the series was that the DC multiverse was getting too confusing. There were, after all, a good half-dozen main universes to keep track of, and DC management thought this was far too complicated for the kids.

Which is still hilarious in hindsight, because their comics became infinitely more complicated, convoluted and confusing over the next few years after Crisis, as soft reboots clashed with hard restarts. And it all seemed so unnecessary, because it was absurdly easy to tell the difference between all the different universes in the first place – Earth 1 were the hip modern things, Earth 2 were the cool old dudes with silver in their hair, Earth 3 was where they were all opposites, and Captain Marvel’s Earth was just cleaner than everybody else’s efforts.

So I used to scoff and sneer at people who didn’t understand the concept of multiverses, because it was so easy to keep track of. I was 10 and could figure it out. My mum could tell the difference between Superman and Ultraman.

But I can’t scoff any more. Because now I honestly have no idea what is going on. 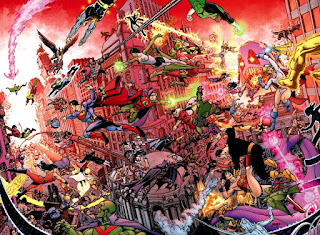 Consider the Ted Kord version of the Blue Beetle – a daft and fairly generic superhero who I still have a lot of affection for, based primarily on his leading role in one of the greatest superhero runs ever. I liked Ted, and was suitably gutted when he was shot in the head 10 years ago, mainly to show how rotten everything was getting. (Good job, DC!)

But I honestly couldn’t tell you if he’s currently alive or dead in the regular DC universe, or young or old, and whatever. I saw him show up in some Convergence-related comics, but I don’t know what that means, or if it means he is sticking around. I don’t know if the Dan Garrett version is still a thing, or if all those adventures thtat Jaime Reyes got up to still actually happened in current continuity.

And that’s just one character – I am totally baffled by vast stretches of the DC universe, and sometimes I don’t even recognise anything familiar. I could still keep track of things, even when I wasn’t even reading any of the damn comics, as recently as a couple of years ago, but I’m just lost now. 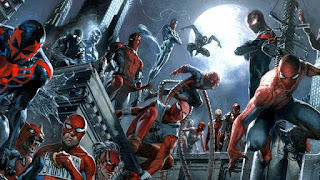 It’s not just DC. Marvel has unleashed a vast number of related titles spinning out of their biggest characters, all just as confusing. I could give a history of the X-Men in detail up to about Uncanny #300, and can give broad strokes for the next 15 years, but get a bit lost after that.

And now, with all their Secret Wars shenanigans, I don’t know what the hell even counts as the real world any more. This patchwork approach is great if you just want some kind of action-figure plotting, with zombies versus Ultrons versus Doom, but it blows the whole idea of a coherent universe right out the window.

Which undermines a lot of the appeal of the Marvel Universe, on a very fundamental level. If it is a mish-mash of different worlds, than nothing matters, and nothing is important. You can make a big deal out of killing Wolverine, but when there are 20 other versions ready to step in, it just becomes a confusing mess of real/not real – Schrodinger’s Marvel

This all used to be so easy. I know part of the reason is that I’m an old fart who doesn’t really give a shit about 94% of all superhero comics anymore, but that’s been the case for the past 20 years, and I could still keep a coherent view of the big picture. I still read collected editions from the library, and it was easy to keep up with the hype of the big events in these perennial heroes’ lives

Not any more. I’m so lost, and there are three main reasons why. 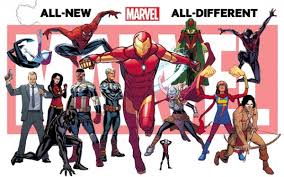 The first is that there are just too many revamps, restarts and reboots. The big comic companies are so obsessed with giving new readers jumping-on points, that it becomes impossible to work out where to start. When even a title with a concept as simple as Secret Avengers has had three different restarts in three years, with little obvious sign of what came first.

And the full reboots they keep pushing out never work, because they’re no full enough. They never go all the way and start from scratch, too scared of upsetting a loyal readership, so they have to make sure that things like the Killing Joke and Civil war really, actually happened, even though there is no way they fit into the rapidly sliding.

This drive to keep making things contemporary leaves the companies with a bunch of concepts and characters that are instantly dated, and ones that nobody in their right mind wants to follow. 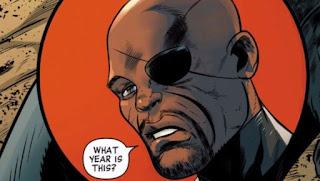 The second reason I’ve got so lost is a storytelling one – too much time travel, too many alternate versions and too much time spent dicking around in new dimensions.

I’ve got no problem with time travel stories – Doctor Who is still the greatest TV show in the history of everything – but when they’re happening so frequently, and in so many different comics, any rules invariably go out the window, and you end up with multiple versions of the same character, adding to the whole cacophony.

And with multiple worlds and universes in both Marvel and DC continuity, neither publisher can resist breaking down the barriers between them. Wolverine might be dead (and we all know how temporary that is going to be), but there are 12 other versions of him running around the place, so it’s not like we’re going without.

It turns any noble sacrifice to mud, when there are a whole multiverse of replacements, and it’s almost impossible to keep track of all the different versions, no matter how much the creators sweat to make them stand out. 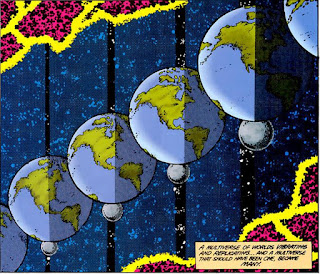 It was easy enough to keep track of, say, the X-Men when there was just the one Uncanny title and a couple of spin-offs, but when there are up to 12 X-comics coming out a month, it’s easy to let things slip. Sales are a mere shadow of what they once were, and further dilution of the more successful brands and characters can’t help, especially when it makes it harder to keep track of everything. 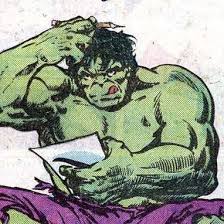 And so I’m genuinely lost by it all. Maybe, once upon a time, there might have been a spark of interest in following this complicated trail as far as it can go, but that enthusiasm is long since extinguished.

There is certainly an audience for this tightly-woven incoherence. And I don’t mind if they scoff at me for getting confused by it all. They’ll be old and confused one day too.
Posted by Bob Temuka at 3:03 PM