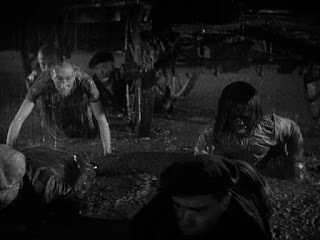 Somewhere in the late nineties, and my mates and me were so fucking stoned that when somebody suggested they put on a film made 60 years ago, nobody complained, especially when the cover for the video said it was so intense it was banned for decades.

And like the arseholes we were, we had a great time laughing and making fun of the 1930s production values, and the stilted acting, and the goofy freaks at the heart of the movie, and then holy fuck that last 10 minutes.

Crawling through the mud in the storm, intent on hideous revenge, the title characters go from lovably human to straight-up Monsters From The Id, the horror of their merciless advance still seeping through on videotape all those years later. All that 90s irony we were relying on didn't stop it from being massively, truly disturbing. And then to go out on the deformed chicken woman, and we weren't laughing at it anymore.

Nobody was laughing anymore.