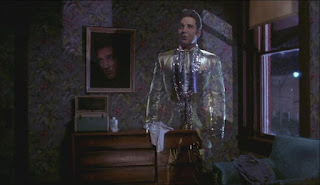 Elvis is haunting every frame of Mystery Train, he's on the soundtrack and on the walls and in Joe Strummer's hair, and everybody passing through this deserted and dying Memphis is wading through his legend and reputation. Even if you think Carl Perkins is better, Elvis is always the King.

But when he actually makes a late-night appearance in a bemused traveller's hotel room, he doesn't have any wisdom to impart, no advice to dispense, or any knowledge to share about the greater mysteries of his music or the universe.

It's all just a bit of a mistake, really. He's not supposed to be there, and just stands around awkwardly until he fades away again.

Elvis has left the building and he didn't have much to say after all. He's still pretty cool, though.
Posted by Bob Temuka at 5:48 PM