Great Moments in Cinema History #7: Meshes of the Afternoon (1943) 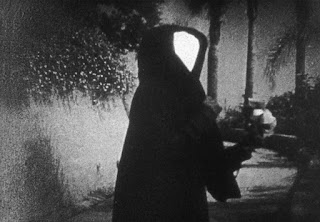 Maya Deren's arthouse masterpiece has a fantastic dreamy atmosphere throughout its short running time. There isn't much of a coherent plot, but there is a deeply unsettling vibe to the whole affair, unlike anything else produced on film during the same period.

But the first time you see the figure with the mirror face is so striking and so unusual, it makes the film feel truly timeless. There is something uncanny and deeply unsettling about seeing a reflected surface where facial features should be, it's an icon of an image and a truly horrific moment in cinema. And when you're half convinced you're going to see yourself staring back if you look too long, it's one that sears into the memory forever.
Posted by Bob Temuka at 6:28 PM