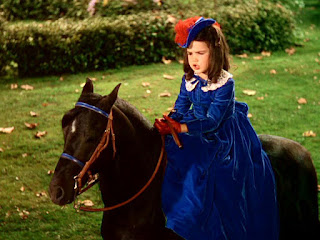 Even if you've never seen Gone With the Wind, you'll be familiar with some shots and scenes - Scarlett declaring to a blood-drenched sky that she'll never be poor again; the pull-back reveal of all the wounded confederate soldiers lying in the railway yard; the camera swooping down on Rhett Butler as he waits at the bottom of that glorious staircase.

But when you actually watch it, it's a little surprising how hardcore it gets sometimes: Scarlet straight up shoots some dude in the bloody face, and just when she needs a little more tragedy in her life, her young daughter Bonnie is killed in a horse-riding accident.

It's an awful sight, but also darkly hilarious. Poor little Bonnie goes straight through the jump head first, and her cute little legs stick straight up into the shot when she hits the ground. It's also a joke of repetition, after our heroine's dear old Dad died in the exact same way, but Scarlett is too busy thinking about how much she wants to fuck her best bud's husband - a lifelong obsession - that she doesn't even notice her precious child barrelling towards that same fate.

As unintentionally funny as it is, it is still a genuinely shocking moment, far removed from the gentle reputation of a Hollywood classic. No wonder you never see it in a montage of magic moments at the Oscars.
Posted by Bob Temuka at 7:22 PM