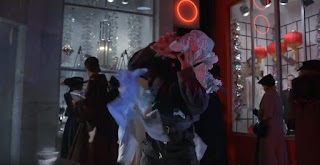 For a moment there, it really looks like Sam Lowry is going to get away from it – the attack on the party headquarters allows him to escape his vast torture chamber. It's all a bit fantastic, but no stranger or any unbelievable than anything else in this crazy, rambling story of a fucked-up dystopia. And then Harry Tuttle gets his foot caught on a piece of paperwork.

When Tuttle disappears into the paper, it's the first real confirmation of the truly fantastical in the climax, and it's a dread confirmation that this isn't real, just another sad fantasy of a deluded mind. It's not long before he's riding off into a happy sunset with Kim Greist, who suddenly isn't dead again.

It's no real surprise when his torturers crash back into the dream in the final seconds of the film, because that dread that this isn't the happy ending it looks like has been building, and it starts with a receipt caught on a foot.