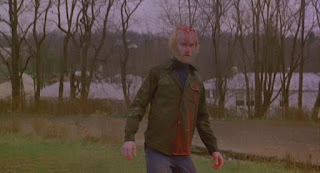 Dawn of the Dead has already shown some of the most impressively gruesome flesh tearing and bullet wounds before one of the most unfortunate zombies sticks its head into a helicopter rotor, but the way the top of the head is sheared away and a river of gore flows out of his head is another step up entirely.

It's a perfectly timed gag - the slow approach of the ghoul, the sudden realisation that it's getting too close to those whirring blades and the instant scalping - it's a genuinely funny moment among the despair.

It also lets the viewer know that while Dawn of the Dead has serious things to say about modern society, and is loaded with ideas about paranoia and desire and rampant consumerism, it is also being made by people who fucking love what they are doing, and are having a great time coming up with new and innovative ways to destroy the living dead. Just because it's taking place during the apocalypse and there are a lot of serious points to be made, doesn't mean you can't have fun while you're doing it.
Posted by Bob Temuka at 7:12 PM