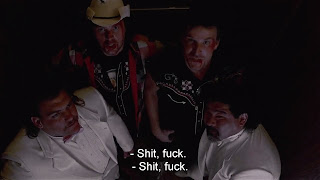 When blind swordsman Rutger Hauer cuts the power to the elevator that henchmen Lyle and Tector are riding in, their exasperated cry of: 'Shit!' 'Fuck!' 'SHIT-FUCK!' isn't just one of the greatest uses of profanity in modern cinema, it's one of the great henchmen moments.

The synchronised profanity from the two scumbags - named after their slightly less sleazy counterparts in The Wild Bunch - shows that they are a duality, each an individual entity adrift in this vast cosmos, but also singular of purpose and goal. They are literally brothers, and answer to the same boss, and have the same enemy, but after years of working as partners, they have similar thought processes and the physical expressions of such thoughts. Each is his own man, while part of a two-man team who only ever do their best work together, even if they do end up semi-accidentally shooting each other. They are apart, and together, in this eternal dance of life and henching.