The comic shop that is depicted in the first issue of Evan Dorkin's recent Eltingville Club series is a horrible, horrible place. And it's horrible because it's true.

There are really places like that – where females are made to feel incredibly uncomfortable, where a mean owner gouges kids out of their pocket money, selling them shit and sneering at them for buying it.

There really are comic shops that are just filthy, and dirty, and smelly, and actively intolerant of anything outside their meagre sphere of experience or taste. Dorkin's excellent comic is a spot-on portrait of all the worse aspects of a comic book shop – a place of sneering and unwelcome dishonesty built on a bedrock of undeserved entitlement.

There are comics shops like that out there. I've been to a few of them. Fortunately, while this type of store was once the norm, it is now very much an exception, and there are lots and lots of other kinds of comic shops as well. 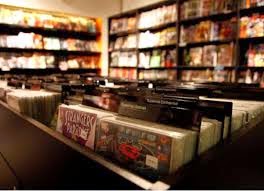 I literally travel the world to see what the comic shops in Stockholm and Sacramento and Ulan Bataar are like. After an adolescent starved of any kind of comic store, I've been to dozens and dozens in the past decade. Comic shops are always my favourite shops, and I've always got an eye out for a new one. I will literally cross the world to check one out.

Some of them were the fleapits seen in Dorkin's comic. Dark, dirty stores with surly staff that couldn't be more unwelcoming, with poor selections of worthy comics, carrying the same old crap as everybody else and refusing to even entertain the notion of changing their ways.

But out of all the comic shops I've been to, those kind of stores are the definite minority – certainly less than a tenth of all the shops of visited. Those kind of places can survive for years on a cliente who rumble on through sheer inertia, but they also drive away new business, and they easily vanish. 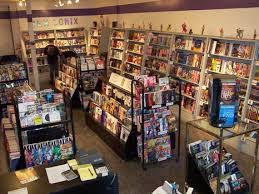 The vast majority of comic stores I've been to have been bright, friendly businesses with knowledgeable and helpful staff. They may have a different focus on a different kind of customer, but they all share an honest urge to help their customers find the comics they're after.

All of these places are clean and tidy and welcoming to any new face. The cliché of the nerd fortress is built on some truth, but it's not the reality for most comic shops.

And while they all share a professional, clean and friendly attitude to selling funny books, they are all slightly unique. Many stores don’t bother with anything that isn’t produced by the biggest publishers, others only have a cursory selection of Marvel and DC comics. Some have exceptional Manga libraries, other stores might have unexpected Doctor Who or Star Trek collections to sell off.

Some stores devote a huge amount of space to kid’s comics, or hipster delights, or sword & sorcery nonsense. Some actively court new female readers by making the stunningly simple move of offering them something they will actually want to read. (This is a controversial approach, but pretty damn effective.) 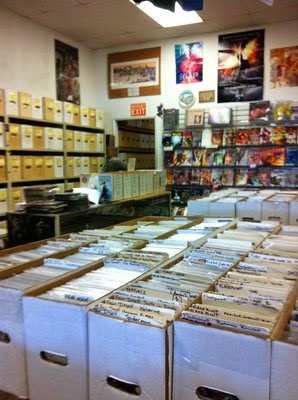 None of these stores are going about things the right or wrong way, they’re just offering up different things to different customers, and making a living where they can.  Who can blame them for that, even if they don’t offer everything you might be after?

I like all of these stores, and I usually find something worthwhile in every single one I go into, and I’m proud to support them as much as I can.

I like the bright, inviting and clean stores, and I like the way they demolish stereotypes of the unwelcome nerd enclave. But my favourite stores, the ones I really do travel the Earth in search of, are the messy ones. 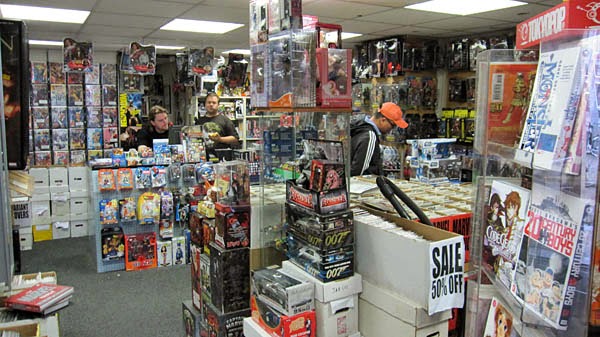 When I say messy, I don’t mean filthy or dirty, I just mean a store that has a lot of weird, esoteric product. Things I’ve only heard about, or seen ads for decades ago, or didn’t even know existed.

And that’s why I like the messy stories best, because that’s where I find these things. Things I’d never even heard of, even with favoured creators involved. A well-organised store is good if you know what you are looking for, but a messy store is where you find the things you didn’t even know you were looking for.

Messy stores have things like piles of pristine Bronze Age comics stacked in a corner, going for insanely cheap prices. And messy stores are where you stumble across pieces of brilliance that completely avoided your radar – early printings of lost collections, small press gems, unknown reference books and the strangest of mini-comics.

They can also be places where you can load up on beloved comics without having to mortgage the house - these are the sort of places where I can load up on early issues of Peter Milligan's Shade The Changing Man and John Ostrander's Suicide Squad for fifty cents each. 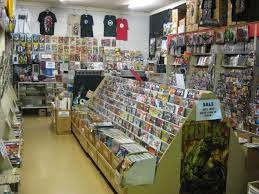 Messy stores can also be gross stores, and that can be off-putting to civilians. They’re never going to be that welcoming, by their very nature, because they are full of piles of weird esoteric stuff that could put off anyone. But they can also be friendly, cosy places, where new customers are given free rein to rummage for four-colour gems.

In all my travels, I’ve found a few perfectly messy comic shops. They’re out there in Sydney and Amsterdam and Dublin. I thought I found another one in Brisbane the other week, but it was bloody closed. I was gutted, because they really are rarer than the awful shops like the one in the Eltingville comic.

But I still keep looking. These are the shops I dream about,  and hunt for, and it's a hunt that never gets old.
Posted by Bob Temuka at 7:44 PM