Despite having one of the goofiest looking helmets in all of comics, Johnny Alpha, the Strontium Dog, is one of 2000ad's toughest characters. Born in the nuclear wasteland, dedicated to righting wrongs and seeing justice done, and despised by polite society, Johnny always got the job done.

It's the closest thing to a Western 2000ad ever had, a bounty hunter on the frontier of humanity, moulded in a brutal civil war, bringing law to the lawless. He had some trusty pals, and some bitter enemies, but he was never cruel, and he was never a bully. (He was also British, but nationalism doesn't mean anything out among the stars.)

Alpha died more than twenty years ago, sacrificing his life to save a bunch of working class mutant kids, and the story went on without him, before fizzling out after a couple of years. He came back about a decade ago, in all-new stories set long before his noble sacrifice, and they were terrific stories, mainly because they were produced by creators John Wagner and Carlos Ezquerra. But they still had a whiff of pointlessness. Once you knew how he was always going to end up, it didn't seem to matter so much any more.

But this is a science fiction comic book, and death can be solved in six-page chunks of bollocks dialogue,and Johnny Alpha came back to life, thanks to the efforts of his old mate Middenface McNulty.

(For a while, it did look like McNulty was giving his life away in returns for Alpha's, and I genuinely mourned the Scots legend, but then he survived anyway, literally because ancient god creatures found him charming and amusing, and he's still happily alive and kicking at the end of the most recent story.)

So Johnny was back, and there was even a Doghouse again, full of other mutant bounty hunters, and it would have been dead easy for the story to fit back in its old groove. You could have Johnny looking off into the middle distance every now and again as he contemplated the existential angst of his rebirth, but he could also get out there into the galaxy and do what he does best.

It would have been so easy to take that step backwards, so Wagner and Ezquerra did something else instead, and took the story a step forward into strange and slightly unsettling new territory. 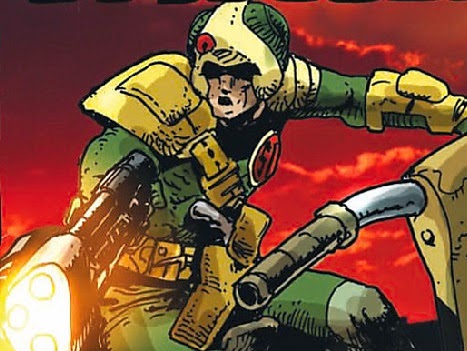 Instead of using his Number Four Cartridge to take down disgusting villians on dusty planets, Alpha sparked the second great mutant uprising when he discovered that the Norm government had been secretly sterilising the mutant population with tainted food aid. Faced with extinction, Alpha and his mutant army went on a full-on offensive, determined to see those responsible face justice for their genocidal crimes.

The last round of Johnny Alpha stories dealt with the final battles of this war, with atrocities mounting on both sides, and it was full of action and passion, but it was also weirdly awkward and callous and confusing. 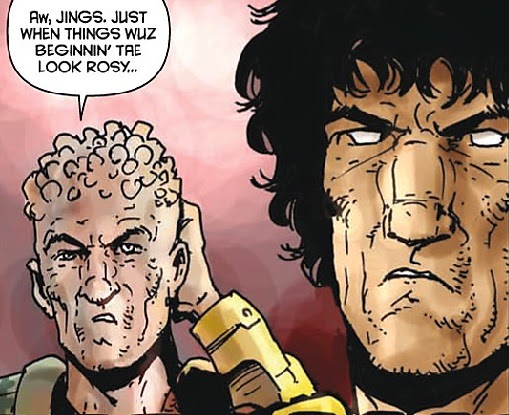 Ever since his return from the dead, the Strontium Dog stories are all over the place – the politics are dodgy, there are murderous dicks on both sides of the fight, and there is no status quo to grab onto. Dredd has his ups and downs, but he always has the city, and the other Judges, and the Law – Alpha’s latest war is little more than an angry cry in the dark.

Some parts of the stories are simplistic enough – when a bunch of racist American redneck Nazis show up towards the climax of the war, it’s enormously satisfying to see Johnny and his friends slaughter them without mercy. But there are also grimly funny moments, like when Johnny is talked out of massacring a bunch of old men, women and kids by Middenface, and then everyone just walks off as a group of prisoners of war are brutally executed behind them.

This is the hardest pill to swallow in the return of Johnny Alpha – if this character loses his sense of natural justice, then there is no hope for anybody. Middenface remains the voice of righteous reason – the fool is always right – but Johnny bloody Alpha shouldn’t have to be told the difference between right and wrong. 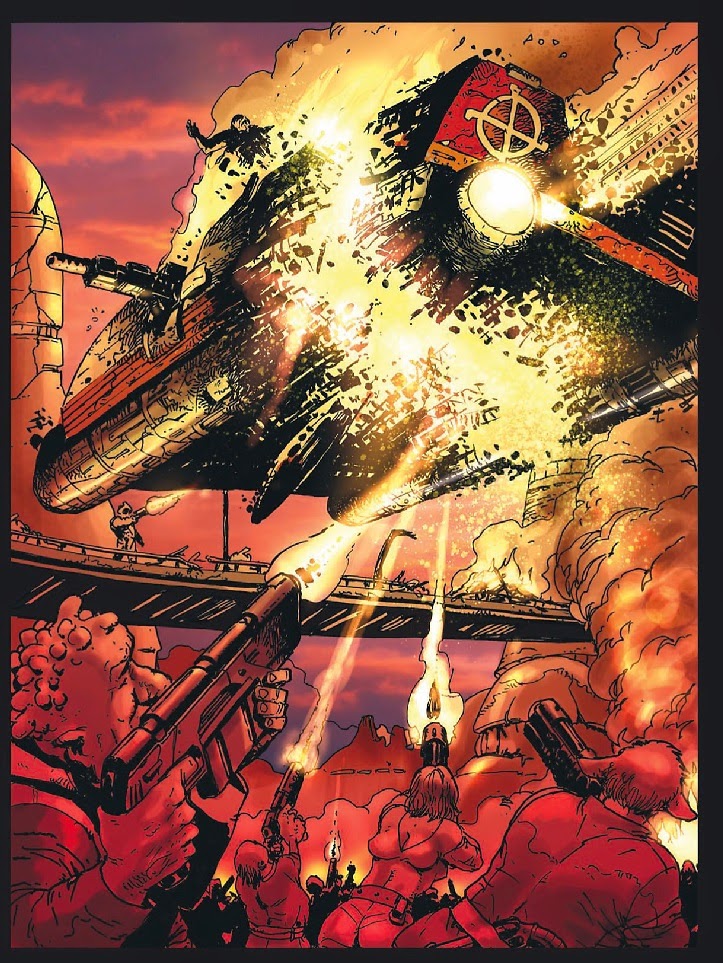 But the strangest thing about it is that it isn’t mischaracterisation, or lazy storytelling or anything like that. There are moments when Alpha acknowledges that he came back wrong, that he should have been left dead, because he isn’t the man he was. He did come back with a smoke monster living in his brain, and when he pushed that out into space, it looked like he could revert back to the good old Johnny, but that was just a feint and he was even harder and crueller than before.

There is ambiguity in this new phase in the life of Johnny Alpha, and much of it is intentional. Wagner is telling stories over years now, and the ultimate point of Johnny's return remains a mystery for now. Is there more Alpha to come, or was this just a strange coda to a strange life, one final encore that everybody cheered for, but nobody really wanted? 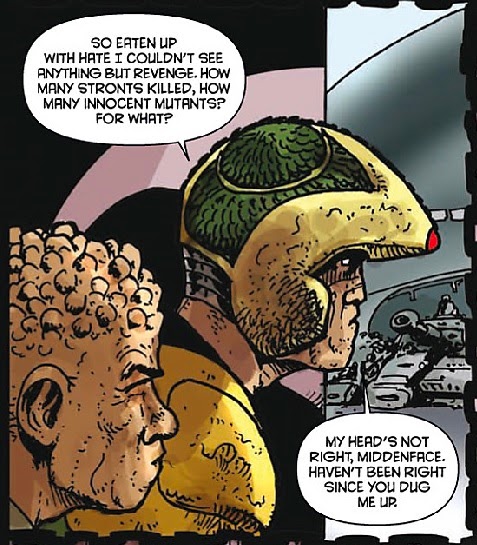 There will be more new Strontium Dog stories, not just because there are always more new Strontium Dog stories, but because the latest one literally ended with somebody saying “More to come on this one, I'm sure”. It’s more of a question about whether Johnny returns or not – his distinctive goofy helmet is seen blasted away by a giant explosion that takes out the architects of the genocide at the end of the latest story, but there ain’t no body yet, and if there ain’t no body, there ain’t no death.

I’ve been following the adventures of Johnny Alpha for more than three decades, and I really don’t mind if this is the end of his story. It might have been a little unsatisfying, but that might have been the point all along - when you wish for the return of a favourite character, you shouldn't always expect to get what you want.
Posted by Bob Temuka at 10:16 PM

The great thing about John Wagner is that he's still experimenting with story structure and confounding expectations after all these years. Part of what I liked about Day of Chaos, (but some of my friends didn't) was the odd structure when he didn't even bother showing much of the horrors of Chaos day itself. There were glimpses of that in the last Johnny Alpha story and it was genuinely disconcerting to see Alpha turn to brutal wartime tactics but it didn't really seem to go anywhere and just seemed to peter out without addressing any of the more interesting issues raised. You kind of got the idea he'd had a really good idea for the story and then midway through decided he couldn't really be bothered to tell it. Hopefully there will be another chapter explaining this but I found it all a bit unsatisfying. Having said that, I'm still very excited about the upcoming new Wagner Ezquerra Dredd epic