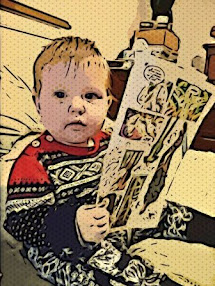 Somehow, my daughter is a year old today. She is young, but she has her priorities sorted - while neither walking nor talking properly, she loves her comics, and she loves them to death.
After months of watching me with my nose in these things, she's got some of her own now. There is a lot of yelling and waving of arms whenever she gets her hands on a comic book, especially if it's bright and colorful, but also some careful studying of the page. She'll stare at it intently, and then give him a judgment in the form of more yelling and waving.
Only a little bit of it gets eaten. The covers never last long, and after a few reads they're literally reduced to tatters, but I still miss up my covers all the time, so I can't blame her for that. And I give her the brightest comics in the $1 bin, and we get our dollar's worth, for sure.
Baby's first comic was an issue of Thriller and boy, did she like Trevor Von Eeden's art, especially when it was printed on bright and vibrant baxter paper. I saw #2 in an op shop the other day, so I had to get her that one as well ,and that's well on the way to total destruction. I could never really follow the story, but she's into it.
I also got an issue of something from Vertigo from 2016 called Art Ops, which I'd never heard of before. But it had some groovy Mike Allred art, which she was very much into. She obviously didn't care for Ron Lim's fill-in art on an early issue of Excalibur as as much as her dad did thirty years ago, and ripped that fucker apart in a day.
She also got her mitts on a cover-less issue of the Avengers from the mid-70s which I'd had for years, and carefully studied the fill-page scene where the Vision saved someone falling by going ultra-dense and dragging is arm down a skyscraper a boss, and then goobered all over Mantis.
Happy birthday, baby! And please stop throwing water on the bookcase full of fancy comics next to the changing table. Your Dad really likes those ones.
Posted by Bob Temuka at 1:57 PM