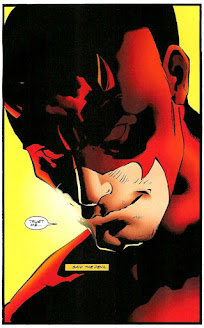 Frank Miller almost ruined Daredevil for everybody else in the years that followed his run on the title. There were some quality comics, especially when excellent creators like Ann Nocenti literally took him to hell and back, but the character was shackled to a grim attitude and abject misery, as he faced the hardboiled truths of the noir hero.
So it was an absolute breath of fresh air to read Karl Kesel and Cary Nord's take on old hornhead in the mid 90s. He was still blindly leaping off the tallest towers in New York, but now he was doing it with a smile on his face - something that hadn't really been done with the character in many, many years.
Kesel had been writing some rock-solid Superman and Superboy stories for DC for years, but his Daredevil was another step up, because he was really doing something different with the character. More in line with the original idea, Kesel's lighter Daredevil combined with the wide, clear and deeply expressive art of Cary Nord to show that the devil might be in hell, but can still crack a smile.
There were even jokes, for cripe's sake, including a nice one early on where Matt Murdock has to run off to do some daredeviling, (which is little more than catching up with Spider-Man over lunch and getting all the details on the Spider-clone nonsense) and the three people he is with all know his secret identity, and have to all cover for him.
The mood swing was so extreme that characters in-story asked if this was another sign of a mental breakdown for Matt Murdock, but he is always a man of extremes, and if he's gonna have a good time fighting ill-doers, then he's going to have the best time.
This run only lasted a year or so, and there was a lot more misery down the line, especially when writers like Brian Bendis and Kevin Smith got stuck into him. But there have been hints of that other Daredevil, who hasn't shucked off the weight of his responsibility, but has the strange joy that being a man without fear can bring, doesn't mean the devil can't smile.
Posted by Bob Temuka at 1:52 PM