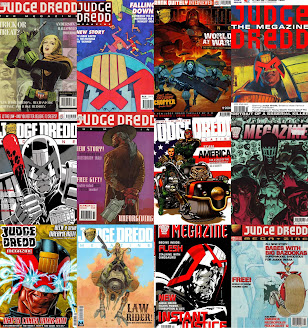 Even though I have spent a considerable proportion of my life getting 2000ad every week, I've only regularly bought the Judge Dredd Megazine twice, and for short periods of time - once in the early 90s, around the second year, especially when Judgement Day was pin-balling between the two titles; and once in the mid 2000s, when they were reprinting Charley's War every month.

This reluctance to become a regular reader of the monthly comic has rarely been due to the actual quality of the comic. From the earliest days of the spin-off, when it had incredible comics like America, to recent years and terrific stories like Lawless, it's been full of thrill-power, with great work by established talents and hot young things.

It has just failed to have a decent cost to story ratio most of the time. The Meg has cost about $20 an issue in this part of the world for the past decade, and when most of it is reprint of things I've already got, I'm not paying that much for new comic pages, especially when the inevitable rules of anthology comics mean a fair amount of those pages aren't any good.

I've still bought the odd issues here and there, especially when the reprint material goes outside the usual 2000ad orbit, or publish a feature-length essay on Nemesis The Warlock, but most of the time I already got the reprinted material in its original form.

Even with this lack of a decent commitment towards the Megazine, I've still manged to collect almost the entire series in back issue format, where they're five bucks or less, because the cost to story benefits balance out. It takes a while, and I usually buy years worth at a time when I see them. But it means but I'm constantly behind by several years -  the most recent bunch I got meas I finally have every issue published in 2013.

This can get confusing when, occasionally, the Meg features a Dredd story has a huge impact on the whole universe, but that kind of crossover is relatively rare, even with the same editor on both titles. Besides, it means every now and then I get a concentrated burst of Dredd's world instead of the piecemeal approach, and that's always drokkin' great.