The origins of self-loathing: Star Wars toys in the toilet 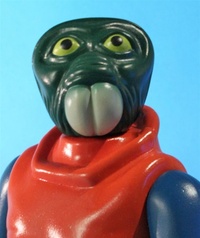 I was only six or seven years old when I felt proper self loathing for the very first time as a human being, and it was the day I flushed some Star Wars action figures down the toilet.
I just wanted to see what would happen when I put my Walrus Man and Death Star Droid figures into the bowl and flushed it, and I remember assuming they would just float about in the whirlpool. Instead, they completely vanished, never to be seen again. I begged my dad to take apart the entire plumbing system, and desperately checked to see if they had popped out an unconnected drain outside the house, but they were gone forever.
And I just felt so damn stupid. Those figures were my everything, I cared more about them than my comic books or even candy. And they were so expensive and hard to find in my part of the world, and I'd just thrown away two of them like they were nothing. I never got another death Star Droid, but I eventually got another Walrus Man figure, and even though I managed to break one of his arms off soon after getting him, I still have that figure somewhere.
And I'd just flushed them away. What did I think was going to happen? What an idiot!
There have been many, many times in my lifetime when I've felt like the stupidest motherfucker on the planet, when I've said or done something so bonecrushingly dense that I can't believe I'm smart enough to keep breathing. It still happens on a embarrassingly regular basis. It happened this morning.
I remember them all, because that's how human brains work. But I especially remember the first one, when I flushed away my best toys, like a stupid little idiot.
Posted by Bob Temuka at 1:36 PM