Love and Rockets: I would go anywhere with you 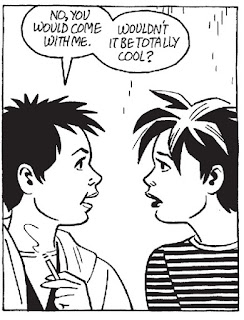 One of the great romances in the Hernandez brothers' Love and Rockets comics - and there have been a few - is the long and complicated relationship between Maggie and Hopey. Their love story has been at the heart of Jaime's magnificent Locas saga since the very start, even when the two were apart for long periods of time.

Like Judge Dredd, this is a story that has grown in real time over decades, and has only become richer and deeper over the years. In the 30-something years since Love and Rockets was first published, Maggie and Hopey have both grown as characters and matured as people - from a busy, energetic life as punk rock chicas to the slow comforts and unresolved histories of middle-aged existence.

But in all that time, and in all their adventures, readers have never really seen how this pair really hooked up in the first place. There have been plenty of hints and tantalizing flashbacks over the years, but they were a total couple of the very first page of their story, and there hasn't been a time in the comic where they weren't inextricably linked.

The latest issue of the current volume turns all that upside down, going right back to the start of their story, hanging around Del Chimney's drug den. The current wave of stories set in that time and place have offered huge new insights into the backstory of this tiny universe - Del has had more on-paper appearances in the past two issues than in the previous dozens of years - and offers up some small explanations to why these two will always be there for each other,

You get to see the exact moment each of them fall in love with the other, and it's heart-breakingly sweet. Without going into too much details - because everybody in the whole damn world should be reading this damn comic - somebody says something incredibly mean and terrible about Hopey, which is bad enough, but the little firebrand doesn't even get angry about it because she knows it's true, and she just takes it. It's just sad and humiliating, until Maggie speaks up for her, and shows Hopey that there is somebody in this stinking world who cares for her, and always will.

And then, when the pair are talking about leaving their shithole town, when Maggie is feeling alone and unwanted, Hopey tells her they can just go off together. They don't need anything else except each other, and maybe some frozen burritos for the road.

They are two beautifully sweet and true moments. It doesn't always work out the way they plan - when Hopey does later disappear into America, she leaves Maggie behind - but it's the forging of the bond that will never, ever be broken.

There is some irony that Jaime is tackling this part of the story at this stage in his career, with the skills he has built up as a master storyteller needed to properly sell the moment - as always, it's not the dialogue that sells the moment, it's the looks on their faces when they say it, and Hernandez has been doing the best facial expressions in the business since the 1980s..

Brother Beto is treading similar waters in his own contribution to L&R #4, heading back down below the border for a tale of Palomar, and looks back at one of the key incidents from the very start of that saga, finding new depths in old tales.

But this looking back at history is not driven by nostalgia, is more about how the events of youth impact on the rest of your life. (It's notable that the current-day versions of Maggie and Hopey are left trapped in the dodgy cliffhanger they were in at the end of the last issue, thank goodness we don't have to wait a year between issues anymore, so we can be left hanging for a couple of months.)

We leave our pasts behind, but they're always with us, and the people we share our pasts, presents and futures with are the ones who always matter, no matter how hectic life gets. Jaime Hernandez is getting on in life, but he's still that young punk at heart, and so are his characters.

Love and Rockets comics are still the best comics.
Posted by Bob Temuka at 9:27 PM