Judge Dredd: The final mission of the Apocalypse Squad 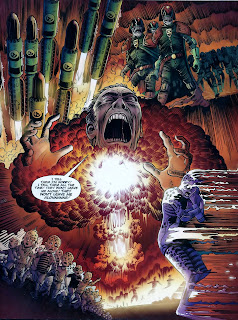 It's one of the great moments in the 40-year history of Judge Dredd. On a desperate mission to save his own city from annihilation during the Apocalypse War, Dredd launches a retaliatory strike against the Sov aggressors that totally wipes out East Meg-One. He slaughters half a billion people without hesitation, cutting off all pleas for mercy with a curt 'request denied!' before pushing the button.

It's a moment of high drama, shows that Dredd is a totally double-hard bastard, and a deeply satisfactory way to end the gigantic Block Mania/ Apocalypse War storyline. The Sovs picked a fight with the toughest judges on the planet, and inevitably paid the ultimate price. As always, Dredd is harsh, but fair, (but mainly harsh).

But one of the great things about a story that has been running continuously for decades is that big events like this aren't just endlessly rebooted, recycled and retold; instead they have repercussions and consequences that echo down the years, and only get stronger as they build upon each other over the decades.

Judge Dredd's decision to wipe out East Meg One has had plenty of those repercussions, which have taken years to play out. Sov survivors of the war have been on a constant quest for revenge for their destroyed city, cropping up again and again, just when you think they are finally done and dusted. It all ultimately culminated in the Day of Chaos, where the Sovs finally win, and may have finally crippled the great Mega City One.

And even now, after all these years, Judge Dredd co-creator John Wagner has plenty to say about this particular aspect of Dredd's story. His recent War Buds storyline in 2000ad, with beautifully chunky artwork by Dan Cornwell, went back to see what happened to the men who joined Dredd on that fateful mission, and found they were still struggling with what they did in the name of Mega City justice.

Dredd always took responsibility for the destruction himself, and has always been strong enough to handle the burden. He has always been certain it was the only way to save his beloved Mega-City One, and has shrugged off any doubts with his usual habit of tight boots. He carried on, and endured, just as he always does.

But Dredd is too iconic to be an actual human being, and War Buds revealed the men who made up the numbers of his Apocalypse Squad had been paying the personal cost of this heinously murderous act for most of their lives. Aside from Dredd's main allies like Hershey and Anderson, who have been a constant presence in the strip over the years, none of them are judges anymore, and none of them have really learned to live with what they have done.

The medic who went on the mission suffered the most, with a total mental breakdown, and the War Buds story saw his former comrades trying to save him from an ignoble end through euthanasia. The ex-judges have some brief, tiny moments of pride and dignity left, but it doesn't go well for anybody, and ends in farce, blood and encubement.

The moral authority behind Dredd's actions in the war have always been ambiguous - the question of who started the cycle of aggression and retaliation has been raised several times, and right from the start it's been notable that Dredd kills 500,000 people in East Meg One to save 400,000 from his own city. On pure logic and numbers, his actions are more monstrous, no matter how square his jaw is.

Nobody knows this better than the people who were in the room when Dredd pushed the button, and who then flew over the smouldering crater that was once a vibrant Sov city. The horror of nuclear destruction may have been their only path to victory in the Apocalypse War, but that doesn't make it any less horrific.

It made for a cool moment, back in the day, but the climax of the Apocalypse War is still destroying lives, all these years later.
Posted by Bob Temuka at 4:54 PM