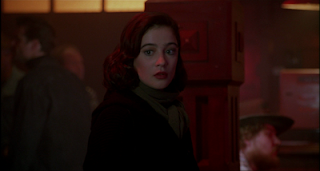 David Lynch is largely seen as the primary creator behind Twin Peaks. This is partly because he directed so much of it; partly because everything on the original show turned to crap when he wasn't around; and partly because the recent return to TV didn't just feel like a Twin Peaks revival, it felt like a thematic and literal sequel to all of his movies, from Eraserhead to Inland Empire.

But Mark Frost's contribution as co-creator should never be ignored. Some of the weirdest stuff in the entire history of Twin Peaks - which is usually immediately credited to Lynch - has come straight from Frost's brain. Agent Dale Cooper is often seen as a straight-up version of Lynch in his youth, but his steely, zen determination to do the right thing is also a fair reflection of Frost.

An accomplished novelist, Frost also book-ended this year's third season of the show with two publications, one that looked at the weird pseudo-history behind the show, and one that revealed a tonne of information about its strange ultra-present.

The Secret History book - already discussed here - tied the bizarre events of Twin Peaks and its gateways to other worlds into the esoteric and occult history of the United States, weaving in the most far-out Fortean history with real unsolved mysteries, and trying to explain this mad modern world through the medium of other-dimensional contact.

Despite some incredible revelations, (especially around the town's decrepit newspaper publisher), the book didn't really have much of an impact on the new series, serving as an prelude to all the recent events, few of which even mentioned this mad history.

But The Final Dossier - the second book by Frost that sets out to fill in the blanks - ties a lot more directly into the new show, giving a new perspective on the weirdest events, and answering questions the TV story was never interested in addressing.

And there are loads and loads of revelations - it fills in the fates of Donna and Annie and Leo that were never discussed on the new show, while also offering brief glimpses of the future past that astonishingly bleak ending and of a new, slightly unsure reality where Laura never went inside the railway carriage.

It's fascinating, and addictive reading, filling in so many gaps. It explains what actually happened to Major Briggs and sorts out the difference between a tulpa and a doppelganger. It sorts out its own contradictions, like how Norma's Mom can be both dead in the ground and in the town in 1990, slagging off the decor of the Double R. Even the most inconsequential chapters can be funny as hell, like the vision of Jerry Horne turning an entire mountainside into his personal stereo, and some of it is genuinely moving - reading about Big Ed and Norma is almost as heartwarming as their long-delayed reunion on TV.

But still, despite proclaiming itself as a novel on the cover, it feels more like a reference book than anything else. There is so much information, and so much data, and not much of a plot. It's a lot of fun, but it's so totally inessential. The omissions of information on the show were there for a reason, building that sense of paranoia and confusion that the filmed story thrived upon, and there really isn't any need to explain it all so thoroughly.

Mind you, it might not even be canon. Lynch has famously waved it away as "Mark's version". Only dickheads get too hung about about canon, and this new book definitely falls onto the 'who gives a fuck' side of the equation. It's canon if you want. Or not.

In the meantime, it's one last trip back to the weird and wonderful town of Twin Peaks, and I'm always up for a visit. It might be inconsequential, but the most best things in life usually are.
Posted by Bob Temuka at 12:01 PM