Prophet: Food of the future makes me sick 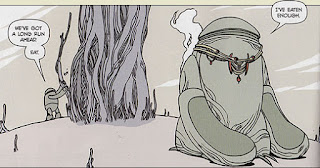 The recent Prophet comic series by Brandon Graham and friends was set thousands and thousands of years in the future, in a universe where mankind has become effectively extinct, replaced by strange descendants and hybrids, as immortal superheroes transcend their physical dimensions and endless clones remain stuck in time.

It's a story with so few modern frames of reference that it can be hard to even follow what the hell is going on, a lot of the time. This confusion can only be intentional, because it makes for an intriguing reading experience, and because the creators have obviously put a huge amount of effort into making this world as alien as possible.

The comic is saturated in unknowable thought processes, and bizarre new cultures. There are beings whose very concept can not be fully grasped by human minds, and there is food that looks fucking disgusting.

The few surviving natives of Earth have all evolved into new forms, and new realities, but there are still all sorts of people who have to live in the shit, even if they might have sixteen arms and a gaping hole where their face should be. Whoever they are, they gotta eat to survive, and the nutrition they take in is probably something a modern 21st-century human would never be able to gag down.

Food comes up a lot in science fiction, but it is usually some kind of paste that is meant to taste like roast chicken. That's getting a little weird, but it's not like the food in Prophet, which is awful to look at, let alone put in your mouth and swallow. It's truly alien, in a way few other sci-fi stories never even bother thinking about.

But when the main characters of this space-spanning saga take a break from their galaxy-wide marauding, they are eating food with nauseating tendrils and tentacles, or going past a stall selling meat that looks suspiciously humanoid. If you somehow become immortal, and somehow survive the next few hundred years, you best get used to eating things that would disgust you now.

Food is always changing - you can only imagine what any lady or gentlemen from a scant 200 years ago would make of a McDonalds burger if you slammed it down in frobt of them, and there is no reason that we're going to be eating food that looks anything like our current menus, in even a few short decades. After thousands of years, there will be centuries of new culinary delights, moving further and further away from the food now served up on our plates.

And after all this time when humans are just another lost echo in this vast cosmos, you can bet the new survivors are eating something that looks really damn gross.

The world of Prophet is full of mad little future-shock moments like that, where something as simple as eating can be twisted into something that is just a tiny bit disconcerting and disorientating. You're far in the future now, says that meal.

It all made Prophet one of the most satisfying and challenging science fiction comics of the past decade. It's a great story, if you can stomach it all.