I've only got 18 to go. It's taken me more than 20 years to get this far, but I'm three-quarters of the way, so it's not much further.

I'll track him down properly one day. When I do get them all, I'll read the whole thing in order for the first time. Somewhere in space and time, I'm doing just that, although it's a few years away yet. I still have 18 to go. 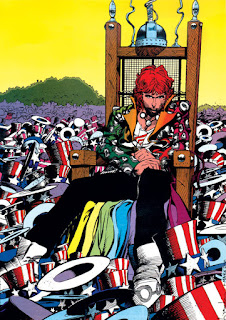 Shade The Changing Man, by Peter Milligan and various talented artists, was a weird, wonderful and wild comic when it was first published by DC in the late eighties and early nineties, and it remains just as singularly fucked up as it ever was, all these years later.

Launching on a hoary old “let's go find America” meta-quest, Shade grew into a situationalist soap opera, where real, human, emotions were raw and exposed, while characters still had to worry about being turned into post-modern bullshit modern art, or creatures made of dead skin, and risked permanent madness, all in gooey four-colour psychedelia.

It’s also the perfect comic for reading out of order, and cutting up the linear storyline into 77-issue chunks and spreading them about a bit is to be recommended. But then I would say that, I didn't have a choice in the matter. 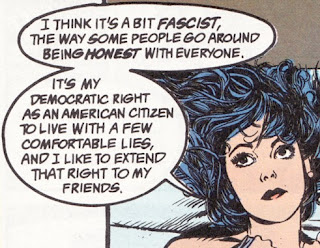 I only ever bought a couple of issues when it was coming out, late in the run, because they never made it to the bookstores near me when it was in its prime. But it’s the sort of comic that I always, always pick up when I see it going cheap in the $1 bins. I’ve managed to cobble together more than ¾ of the series this way, and it means I have never read more than two issues in a row.

For most series, this might be a problem, losing crucial plot turns and motivations, but for Shade, it’s a fine fit for the reality twisting going on.

Skip around the series, and Kathy is alive, and then she’s dead, and then she’s alive again. Shade is in a bunch of different bodies, sometimes ones that are awfully familiar, and his oblivious cluelessness about the crucial details of human feelings comes and goes. Sometimes he's a mad, mod poet god, other times he is literally living in a crack in the gutter.

Actually, with some time travel craziness, and some weird body-swapping going on, this is roughly how it would go if you read the comic in proper order. It was that kind of story. 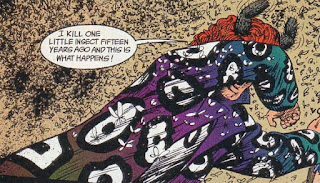 Even though I spend much of the nineties trying, and largely failing, to get people into comics through indisputable brilliance like The Invisibles or Love and Rockets, or through the easy thrills of Preacher and Sin City, I never try Shade on new people.

Largely this is because I only have a wild number of issues, scattered throughout the run. I don't see them that often, and it is taking years. But it's also because these comics aren't for everybody. They're genuinely mental, with wild artwork that's all over the fucking show. I can barely keep track of it all. 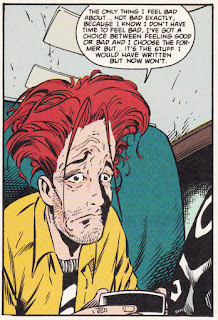 The first time I ever see anything of Shade beyond a few house ads, it's the few pages that show up in the very first Vertigo preview comic, which became an unfortunate bible for this Verti-nerd.

By the time I've grown up, Shade is already finished, and I'm $1-bin diving for the next two decades. Picking them up here and there – finding a crucial issue in London, and getting the first year's worth for fifty cents each at Sydney's grottiest comic shop.

It was one of the first things on The List, and it's still there, although there are a lot of crossed-off issues. I'm whittling it down. 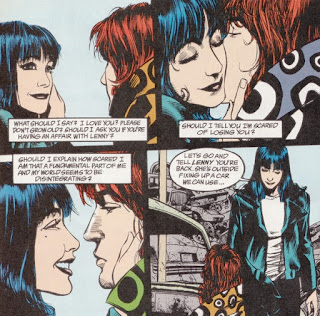 So nothing makes sense, I can barely follow the story and it all gives me a bit of a headache. And if there was ever a comic this was appropriate for, it's Shade The Changing Man.

He showed up again fairly recently, in Milligan's excellent Hellblazer run, and pops up in weird mega-crosssover  tie-ins, so the character hasn't faded away like so many of his contemporaries. He's still out them, maddening it up for everybody.

Whether it's years ago, or just last week, Shade the Changing Man is a creature out of time, and all the better for it.
Posted by Bob Temuka at 6:00 PM

rediscovered the almost overlooked narrative , shade man passed through my collective mind in a semi autobiographical recollection , that once when i was so much older then , its late and the documentary 2000ad is plugging me backwards , there's a brief fortunate mention of the narrative by the creators the art dept , Shade man .