Sometimes the simplest jokes are the funniest. And in the world of comics books, they don’t come any simpler than Groo. 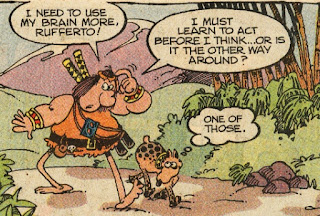 Sergio Aragones, Mark Evanier and Stan Sakai’s Groo the Wanderer comics have been coming out through a variety of publishers for more than 30 years now, and they haven’t got old at all. They’re still as sharp and hilarious as they ever were.

This is largely due to the simple joke at the heart of every Groo story – the lead character is stupid. Like, really, really stupid. His dog is literally smarter than he is. Groo never learns anything from any of his adventures, and frequently is left more baffled than anything by the end of them. He inevitably leaps to the wrong conclusion, is easily confused by the simplest of logic, and is inordinately fascinated by cheese dip.

The dumb guy is always the funniest, as proved by the Homer Simpson equation. And despite some stiff competition, Groo might just be the dumbest character in all comics.

The other side of Groo’s big joke is that while he isn’t blessed with much in the way of smarts, he is still an absolute killing machine. In his fantasy world of vast empires, dreadful dragons and total barbarians, Groo is an invincible force of nature, a rampaging tornado of slayage on the battlefield, and an absolute lethal foe in one on one combat. He can take on Conan in a fight, and frequently wipes out entire armies with his slashing blades.

Combined with the stupidity, Groo’s invincibility see him accidentally laying waste to all around him. He’s destroyed a few empires, and should never, ever be allowed aboard any kind of ship. When he wanders away at the end of the story, usually unscathed, he leaves carnage behind him, and has no idea what actually just happened. That’s never not funny.

It was funny when Groo was first published by Pacific Comics in 1982, and it was still funny in the recent Groo; Friends and Foes 12-part series that just wrapped up. It’s timeless.

And it’s not as one-note as it sounds, because on the bedrock of the great gag, every single issue of Groo, and every single page, and almost every single panel, is still stuffed full of gags. Aragones is one of the great gag artists of the past century, never unable to resist a bit of visual comedy or goofy scenario, and the man who invented cartoons for between the panels of a comic always fills each page with everything he has got.

When combined with the professionally pun-tastic work of Evanier, Groo comics are a true cavalcade of comedy. Evanier’s scripts always strike the right tone for the manic cartooning of his collaborator, and the humour can get incredibly sophisticated in this collaboration. A dumb character doesn’t inevitably lead to dumb comics.

After all, it is easy to wrap surprisingly complex issues into a Groo story. Each little fable isn’t just about dungeons and dragons - any single issue might be a metaphor for international commerce, or gender inequality, or immigration anxiety, or environmental catastrophe. You can tell any kind of a story in this format, and Groo stories are always strongly relevant.

In this regard, there is a bit of the Judge Dredd flexibility to Groo. A solid simple concept allows creators to tell any kind of story around it, and there are no limits to the meaning and symbolism you can nail onto the character. Groo stories might look like nothing but a bunch of laffs, but they’re always about something. They mean something. And throwing in a few pratfalls never hurts. 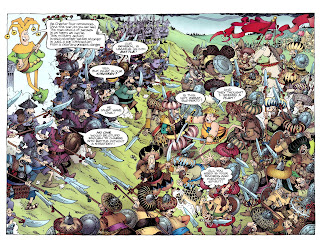 The Groo comic doesn’t quite get the respect it deserves, probably because it’s been so consistently good, for so long, that everyone just takes it for granted. How many times can you say its brilliant?

Well, nobody has to say anything. Both new and old Groo comics still make me laugh out loud, and that’s worth a thousand compliments.
Posted by Bob Temuka at 3:13 PM

I absolutely love Groo comics and have been reading and collecting them for years. Best comic EVER!